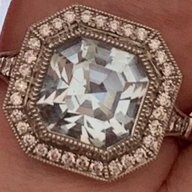 I posted about the problems with my yellow tourmaline before but finally got it set. I have been exploring colored stones and wanted to start with some affordable options with a new lapidary I had been working with. We found a light yellow piece of rough that he said would yield around a 2 carat moval stone and I went forward with the purchase. 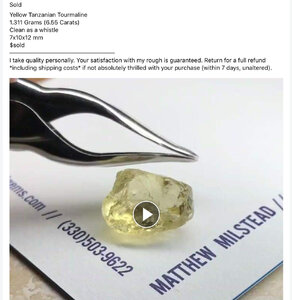 
can go a little golden. The original color was exactly what I was looking for. 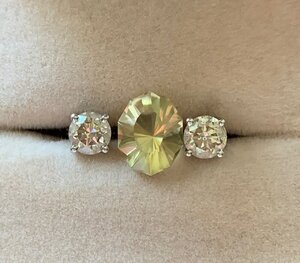 I sent it off to be set but my box was completely destroyed during shipping and the tip was broken off the tourmaline. I had to send it back to the lapidary for a recut and ended up with a big window. In the meantime, I had purchased a pair of .50 J VS2 diamonds for the sides and debated changing the center stone out but I had already invested so much time into finding this stone that I just went ahead and set it. I thought about doing a gold cup to obscure the window but I couldn’t settle on a design so I decided just to roll with my original 3 stone idea. I went for 14K gold and was originally just going to have a miligrain trim but I didn’t like the finished look so I added some hand engraving and black rhoidum plating. The stone is more golden now which is the color I was trying to avoid. The ring itself turned out better then I expected but there are several things I would have probably changed. I started several project while recovering from a car accident but just didn’t have the energy to put into them like I normally do. At some point, I will probably change out the center for a yellow sapphire,

Here are a few glamour pics...its a pretty ring but it is not my favorite compared to a few of my others. 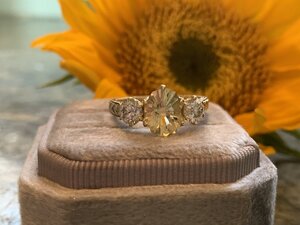 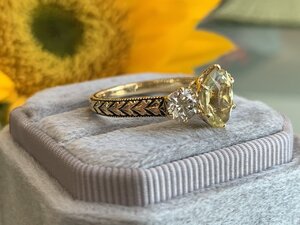 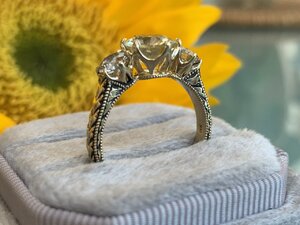 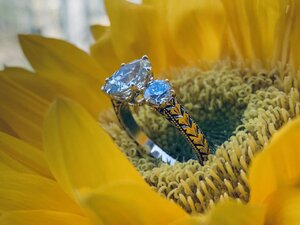 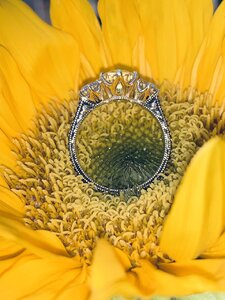 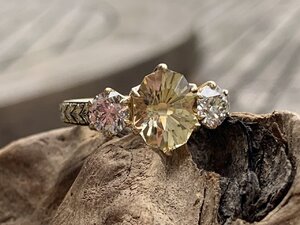 Wow, its certainly one pretty stone! would never know it wasn't meant to look like that! Its how you make lemonade right?
Instead of telling people to "have a nice day", sometimes I tell them "have the day you deserve", and let Karma sort that mess out.... 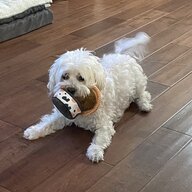 I think it's lovely! 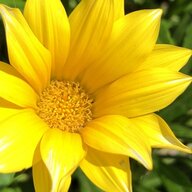 So gorgeous! I’m sorry that you had a car accident and that the tip broke off. It is beautiful in the end.

Arcadian said:
Wow, its certainly one pretty stone! would never know it wasn't meant to look like that! Its how you make lemonade right?
Click to expand...

I just had to roll with it. You are right! I have gotten used to the culet but the only real bummer is the color change. Such small things make such a difference in colored stones! 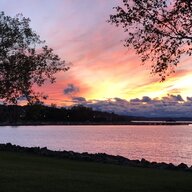 . I love the tourmaline and it’s culet. The ring design is gorgeous!

Lovely stone and ring, thanks for sharing. 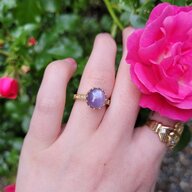 How did miss this?
Love your ring!

TheGarnetGirl said:
How did miss this?
Love your ring!
Click to expand...

Thank you! I saw your latest garnet which is so pretty too. I love any ring with engraving!

swaye2010 said:
Thank you! I saw your latest garnet which is so pretty too. I love any ring with engraving!
Click to expand...

You are too sweet! I'm a sucker for any designs on the shank!
Your ring looks so sturdy and well made! Enjoy your sunny gal!
You must log in or register to reply here.
Share:
Facebook Twitter Reddit Pinterest Link
Be a part of the community It's free, join today!
JEWELRY BLOG