When Did The Halo Craze Begin?

I am sure that halo settings were probably available in the past, but I have only noticed them being really popular in the last couple of years. Maybe I was just living in a cave and was not aware of them. When did halo settings start gaining popularity and where did they originate? I simply love this style of setting!

They seem to have gotten popular sometime in the 2000s... not sure exactly when. But I never saw any except antiquey cluster ones until then. They are definitely really pretty. 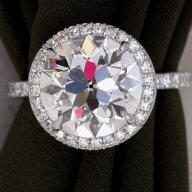 They got on my radar somewhere around 2008 when I first starting thinking about upgrading. They were not popular in the area I was in when we were first talking about our original engagement ring around 2002-2003.
C

It was...the fall of the Soviet Union!

In 1992 the diamond company ALROSA was threatening to flood the market with its diamonds. Russian diamonds are small but high quality.

DeBeers and ALROSA entered into a joint marketing agreement where styles that emphasized small diamonds would be highlighted in its marketing.

I don't even think that eternity rings existed (the concept, not the style) before then. 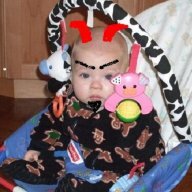 Before the halos took hold, the most people were getting a Tiffany-type 6 prong, the Vatche Royal Crown, or a trellis setting. 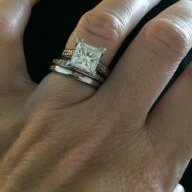 My mum had a ruby engagement ring with a halo - she got engaged in 1965!
P

I think first halos we saw were on diamonds under 1 carat, so would be in the under 1 carat thread. I then remember them
being done on asscher cuts. The first 3 sided pave ones had one or two which crumbed with all the pave holes. Also some
of them had stones keep coming out although I believe this is thought to be normal now and part of having pave.

In the UK we have always had this style, however I only learned on pricescope that some were angled down so as not to look like
flying saucers, the angled down had been here too but I just did not know how to recognise them from the other flatter ones.
I wonder if it is a style from art deco and the 1930s rings!? The craze over here was more the style with prong setting in the early 1980s reminiscent of Lady Diana's engagement ring. I remember thinking that was modern and the ones in micro pave like the new ones here were old fashioned and set with far tinier diamonds. As diamonds are or were usually smaller here therefore the halo
were set with really tiny tiny diamonds. I remember when blue topaz came out here in the 1980s some had tiny round halos around
larger semi-precious stones as their engagement and dress rings but they have always been with diamonds, rubies, sapphires.

Many, many antique rings with diamond halos, so they are not new. But they have been popular around PS for around 10 years. But we see people with halos decide to change back to solitaires, and people with solitaires go to halos. So we are a changeable bunch!
You must log in or register to reply here.
Be a part of the community It's free, join today!
JEWELRY BLOG