What am I missing? Lower than expected store diamond

It'll take me a month or more to figure out what setting and diamond I want, so I'm still looking.

Today I was exploring setting ideas and when they asked me what size stone I wanted to see, I primarily was using a 3ct stone to try on rings with until I decided what the heck....let's look at a 4. So they brought out a 4.02ct stone for me to place in a few settings so I could look. Out of curiosity, I asked for the specs and price on the stone. It was a 4.02ct, EX EX EX, VS2 color F round brilliant stone. They told me it was $48k Now that surprised me...since I've been searching casually online for stones and finding lower quality or color 3 ct stones for higher than that. I expected the price tag on a stone with those specs to be well into the six figures. Now I suppose it is an unfair comparison to some extent since I've been focusing my search on in house vendors like WF or JA but still...what am I missing?

Of course their pitch was about how they are selling diamonds at 'wholesale' prices. They did get me a viewer tool which allowed me to see the hearts and arrows of the stone and they looked as clear as any premium cut stone I've seen online.

I did not ask if it was GIA or EGL but the store claims to carry both, so I'm assuming it was an EGL. Would an EGL stone really be less than half the cost of a GIA? I know when EGL comes into play, you can't really call it an F VS2...but the stone was at least eye clean. I would have guessed it was more like an H or I when it comes to color but those are colors I'm considering.

I just feel like I'm missing something on why their price would be so low.

Without the specs of the stone AND knowing which grading lab it was from, there is no way to make comparisons from here.

Most would advise against buying an EGL graded stone - too much uncertainty about the color and clarity you would really be getting. If the EGL F, VS2 stone would come back as a GIA graded H, SI1, you could definitely see how the pricing difference would occur.
H

Fair enough, yeah I could see how you could get down to that price by slipping several grades

Thanks . I suppose I thought hearts and arrows was rarer or I wouldn't see them in a non GIA stone.

It definitely wasn't GIA, and I agree with MGR that I wouldn't consider EGL. There is a reason the stone wasn't sent to GIA. Always stick with GIA Excellent or AGS Ideal cut. People are actually more likely to overpay for EGL stones as they overestimate what the true specs are.

I have almost never seen one of the "wholesale" deals beat some of the vendors here (and any seller who sells to the public is not wholesale. That is a sales tactic). And unless they are providing ASET images, you really don't have a good way to evaluate cut. (Hearts and arrows viewers are better than nothing but will not allow you to really evaluate leakage.) James Allen is a good price comparison for regular GIA Ex cut stones. Whiteflash specializes in superideal cuts which carry a price premium, but a lot of people prefer top cut.

It is great to try on things to get an idea of what you like, but like most of us who've been here a long time, we found better cut stones at better prices from PS vendors. be sure from here on out you tell them you only want to see GIA Excellent cut stones, because that should be your benchmark in determining the specs you like such as color and size.

Once you feel like you know what you want, we'll be glad to help you narrow down some diamonds.

All modern round brilliants are going to show some arrows unless they are horribly cut, so that is just the cutting style for modern rounds. But better cut stones are going to have specific angle combinations and have more precise cutting.

Also make sure it was not clarity enhanced...price is just too good to be true.
~~~Thanks to PS, my wants far exceed my budget!~~~
H

diamondseeker2006|1449281463|3957706 said:
All modern round brilliants are going to show some arrows unless they are horribly cut, so that is just the cutting style for modern rounds. But better cut stones are going to have specific angle combinations and have more precise cutting.

Thank you! I'm going to make a cheat sheet and keep it in my wallet for the time being.

I looked through my pictures this morning that I took, and in several of them the color looks to be way off. Not terrible but definitely not colorless by any stretch of the imagination. There were fingerprints on the comparison photo FYI, not a great pic. 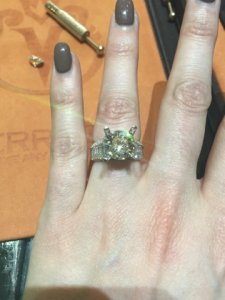 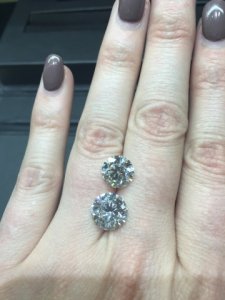 While I agree with all the advice here about GIA and EGL, I just thought of something. If you are buying a diamond with your eyes, and not looking at the specs, perhaps a diamond like this could be a great deal if the OP loves it. If she loves the way it looks - clarity,color, cut - then does the paperwork really matter? As long as she loves it in most lights and as long as there is a good return policy - that last part is crucial.

But I see a potential scenario where there is a fair return policy, the OP loves the stone, takes it home, and still loves it after wearing it for a couple of weeks, and then - bam! - she's got herself a 4 carat for 48k.

When I was a lurker I think I saw something on PS about the different non-GIA non-AGS labs, and someone had done some tests, sending the same set of stones to all the labs. One of the labs came out as pretty close to GIA on all the stones run. It might have been EGL International.

I'm just saying, while there's every chance it's not a great stone, it might be, so don't dismiss it out of hand because it's EGL.

Alternatively, it might be a great stone in the eye of the beholder! I've got this pear halo ring that I LOVE, and it's very unusual because it has a milgrain bezel round the pear as well as the halo, and I've only ever seen that design in Ritani. The look of the ring is just what I wanted but it's a visible I1, although the inclusions are white. It's definitely not a PS-quality ring but I adore it and I paid much less than buying a loose stone and Ritani setting, but it looks the same. It can happen!
~~~~Never be afraid to laugh at yourself. You might just make yourself smile!~~~~
You must log in or register to reply here.
Be a part of the community Get 3 HCA Results
Jewelry Blog