I''m helping a friend shop for his engagement ring stone, having recently gone through the process myself. When I was looking, I was obsessed with finding the best cut possible. I opted for an AGS 000 which scored a 1.6 on the HCA. I thought by keeping it with these parameters it was fairly safe that I''d find a stone that not only looked great in the jewelry store, but also great at home, outside, wherever.

My friend has recently found a stone that he likes very much. It''s a GIA "very good" stone and rates a 3.6 on the HCA. He''s getting a good price for this stone and the size is good for the money. I''ve looked at this stone and compared it to a GIA excellent side-by-side. I really couldn''t tell much difference. My friend feels that once the stone is set, the only thing that''ll really stand out is the size. I agree with him on some level and don''t want to rain on his parade. But I also don''t want him to regret his purchase later. I also feel like the stone could be very good performer and it looked beautiful in the store, even compared with stones with "better" numbers. Also, I looked at the stone under an ideal scope and it showed the hearts and arrows pattern.

My question is for those who have or have seen "very good" stones, what would be your advice? Have you been happy with your stones? Are there very good performers in this group? I imagine there must be. How noticeable is the difference. Having only looked at AGS ideal or GIA ex during my search, I don''t really know how to advise my friend.

Thanks in advance for any thoughts. 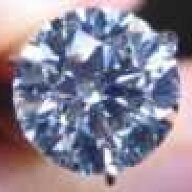 I have looked at our ideal numbers stone next to others with less ideal numbers and not seen very much difference in performance. I think you CAN have a gorgeous stone that isn''t within the accepatble HCA score and with not perfect numbers. We chose to go with the better numbers because I got hung up on the numbers and needed a diamond that was "mind-clean" (I believe that is the term I have seen here on PS).

I say, if you have looked at the diamond compared to others with more perfect numbers and it is still great and the price and size are right. Let him do it. If he isn''t hung up on the numbers and the mind clean part, more power to him . . . I would always be second guessing the numbers but if he doesn''t, GREAT !!! Just my $0.02

Would you mind posting the cut parameters of your friend''s stone under consideration? There are drastic differences between the GIA VG''s. I would not hesitate to buy a GIA VG based on polish/symmetry...but if it was overly deep/shallow or had crown/pavillion angles I didn''t like, I would be more hesitant.

If you friend likes the stone and cannot tell the difference, then this is what ultimately matters and he shouldn''t loose sleep over it!
M

Here are the numbers on the stone he is considering:

Let me know what you guys think. Obviously the high crown angle may be a concern. Also, I don''t know what the spread is for it''s weight. Doesn''t seem like it''s too bad but might not be that great either. Finally, is there a concern with the very thin to thick girdle?

Well...it faces up like a 1.58-1.6 stone...so for the decrease in carat weight maybe he could get a better cut 1.6 carat stone with the face up size appearance. There may be some slight leakage under the table with the depth/crown angle combo...but overall, I image the stone should be pretty.

I''ve always been a firm believer in letting your eyes make the final decision, not the specs, HCA, etc. I mean, it should be all about what you can actually SEE. But if you''re buying over the internet and can''t always get the stone in front of you, the numbers and HCA score are paramount. In the case of your friend, you say that you can''t tell the difference between your AGS0 and his Very Good.....and the VG is large as well. Well, great! I would think there''s your answer right there.

I own an ("old") AGS0 and also a GIA Good cut. I can easily see the arrows on my AGS0 which is really neat; but I cannot see ANY arrows on my GIA Good cut. Aside from that, there isn''t a huge amount of difference between the two. They both sparkle and dance under multiple lighting conditions, which is key. Would I buy a non-ideal diamond again in the future? If the price, size, and performance are right, then YES!

I know that a lot of other PSers here are FAR more spec-oriented than I am so they will advise differently. Mine is just one of many different perspectives. It''s such a personal thing.

My stone is a VG and I think it's beautiful! A lot of firely colored flashes!

Sometimes it seems that we on PS get sooo wrapped up in numbers that we convince ourselves any stone that is .01% off on one parameter will be and "ugly" stone.

Of course, this is crazy. Are there ugly diamonds? Yes. Are all diamonds aren't AGS 000 ugly? No way!

Going with an AGS 000 and looking for an under 2 HCA score seems to me to be a "foolproof" way to get a nice diamond. But, it's certainly not necessary to get a 000/HCA below 2 in order to have a stone that performs well (even the HCA developer says to take the ratings with a grain of salt). I think it would be one thing if you looked at this stone he has found and it was completely dull/dead- then I'd say to steer him in another direction. But, if even YOU couldn't tell much difference between this stone and a GIA excellent, then it sounds like it's beautiful and a good pick.

It sounds like this guy is pleased with his find and excited about this stone. Unless your friend and his future fiance are/become PS addicts, I think it is highly unlikely that either of them will regret this purchase later. He'll be psyched he got a good price on a stone he thinks looks great, and she'll be happy to have a big, shiny rock. End of story!

So, I say don't worry about them "regretting" anything and try not to become too much of a cut nazi on your unsuspecting guy friend. After all, there is something charming about him proposing with a stone that he found himself, you know?

Sounds like the eyes have it on this one. Good luck to both of you in finding the right stone!