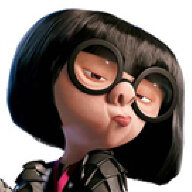 So, I''m stuck between two rings, and I need some help.

I really like the antique style, and after talking with my old jewlery teacher from college, he gave me his Stuller catalog to look through. I found one ring that I liked best, but it''s starting to look cheesy now that I''ve been staring at it for the last few days. Instead of looking floral and elegant, it''s starting to look like butterflies... I don''t know, what do u think? On the other hand, my professor told me he could carve one out of wax if I couldn''t find a ring in the book that I wanted. After looking at Fay Cullen''s site, I found a ring I really love and was thinking about taking him up on the offer. I would change a few things; like instead of the bezel setting, I would use a four prong setting... the band would be comfort fit instead of those three tubes... Obviously the craftmanship of the ring would be a little different.

But I like the shape, I like how it would sit on my finger, and I could put a simple wedding band flushly next to it without too much rubbing. Here it is:

Maybe I''ve answered my own question, because I really like Fay Cullen''s ring, but I thought I''d ask the opinion of others..

I much prefer the second ring.

Oh yeah. Butterflies. I love the second. But um... there are a few halos that are similar to that one out there... and it might cost you less to buy a ''stock'' one than to have one custom built. Have you looked at Adwar for example? They have some nice ones like that... in addition to people like Richard Landi and other designers (who would cost more)....
"So often in life, things that you regard as an impediment turn out to be great, good fortune." -- Ruth Bader Ginsberg

Gypsy:
Well, I thought about that becuase it''s going to be custom. But upon further discussion with my professor, he''s discounting my diamonds and the setting, and charging me a very nominal fee for his help. To be honest, I could probably make the ring myself; I have the wax and tools to carve it myself, but I don''t have time anymore, and casting it would be in his hands. He''s also a perfectionist, and I know his craftmanship, and I could definitely trust it to be better than what I''ve seen at jewlery stores.


Then there''s just the sentiment... of him making my ring.

Before I called him, I thought of just getting a simple tiffany setting and changing the setting later. I spoke with my sister-in-law about it, and she told me she had the same idea that I had.. but now that she has the ring, she''d never think of upgrading it because it means so much to her. I''m sure I''ll end up the same way, and if I could get the ring I want now, at a much discounted price, I figured I should jump at the chance.

I love that ring from Fay Cullen... no butterflies! (not that there''s anything wrong with that...)