Can anybody recommend a quality setter in the Philadelphia area (or Delaware)?

I bought the diamond from James Allen (great place) and had it set at Kao Jewelers.

Kao set the diamond and before I proposed I took some pictures of the diamond with my loop and digital camera (see the one posted) - I took this picture 3 days after I received the ring. I didn''t think it looked right.

But I proposed anyway and threes days after I went back to Kao and the manager (which is the owers wife) told me there was nothing wrong with the setting. She was very rude. I showed her pictures of how it should look and how the diamond should sit nice and tight on the prong. She was more defensive and said, "I don''t need to look at the pictures" and said there is nothing wrong with the way it was set.

Well, today, 10 months later - (while looking for wedding bands) - a different local jeweler took a look at the prongs and said that two of them were repaired. He could tell because it had little bubbles on them. He also said they did a bad job with setting the diamond.

I don''t want to take the setting back to Kao because they think they are in the right and lost a customer.

This new guy wants $450 to reset the diamond in a plat head. I paid $875 for the entire plat ring which include a free crappy setting. 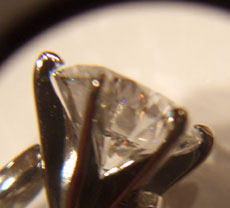 Kao is known for very nice work, but your personality or appraoch and their''s may be a poor match. This is no reflection on you, but these things happen.

I would recommedn J&D at 726 Sansom, A&K at 725 Sansom or Pearlman''s on the second floor of 740 Sansom. There are many others worthy of mention, but three make choosing possible without confusing you.

The existing prong in the photo looks like it snagged on something and was pulled back. This is not necessarily a setter''s fault issue, but potentially a wear or use issue. Possibly the platinum was soft enough to bend back. Its difficult to lay blame from an expert point of view and I think you probably aren''t better qualified to place blame either.

You are entitled to find a good place to have your work done and to be well treated and respected. I hope one of these three can make you feel a lot better about your ring for a fair price. One of these setters might recommend just adjusting and tightening the prongs. You may find that this will completely do the job at nearly no cost. Once prongs bend a couple times they do get a little less likely to re-bend as they "work harden" a little. The prong in the photo does not look overly thin. As far as the prong tip being repaired already, I can''t see the image well enough to know anything on that subject.
David S. Atlas, GG(GIA)
Certified Sr Mbr(NAJA)
Ideal-Scopes-ASET Scopes-Diamond tools
E

That is only one picture of the six prongs. Two others are like that also.

That picture was taken with my fiance wearing it. I took that picture about 3 days after I picked it up from Kao.

When I asked her about it and said there was nothing wrong with it and wouldn''t fix the "problem" - if there was one or not she should have said, "no problem we will tighten that prong for you".

Also, today with this other Jewler looking at the prongs, he said two of them looked like they were repaired. He could (and showed me) the seem (under his microscope).

As for me - the Diamond went to your office and Chris met me several times. With no problems. Chris is a great guy and your office does a great job. When I had diamond question Chris always treated me great.

So, there was a big difference in service between your company and Kao (not wanting to listen to me).

One of the nice things about platinum prongs is that they don't work harden the way white gold does. This should probably be reset but it may not need a new head. This is likely to be a whole bunch less expensive and your jeweler should be happy to give you an estimate. Whether this is sufficient will depend on the 'repair' that you are looking at. There are a variety of reasons that there may be marks on the prongs that are not a concern. Did you have the appraiser inspect the final ring or just the loose diamond before you had it set?

Neil - yes, the appraiser did look at the entire diamond and appraised the ring as a whole. Didn''t say anything about the prong until I found it.

Is it major problem - I don''t think so.

Do I want it corrected by somebody who cares about their craft - yes.


That''s why I went to David and James Alllen - both outstand service. And I know the other online dealers and appraisers that contribute to this board also care about their service. However, it''s hard to find that at a local store - unless there is a large markup on their items. Then you get treated well because you are paying for it.
E

Went to Pearlman''s on the second floor of 740 Sansom - great group of guys. Showed me some interesting antique pieces too.

They fixed my problem for a very small fee and the ring looks great. My business will go to them for now on...

Thanks goes to you and Chris for the referral.