I bought a ring that changes color in different light sources. It is not as large as it looks, as it is approximately 15mm x 8mm x 3 or 4mm, assuming measuring this with a ruler is in any way accurate.

It is from Russia, for the stamps are indicative of this. One includes initials or a word in Cyrillic text. The other is .583 (14k?) and a hammer and sickle as well as a Soviet star. This leads me to believe it was made after 1922. The markings are on the exterior, rather than the interior of the ring.

In incandescent lighting, it emits a reddish purple with the occasional red scintillation. In sunlight, a green-blue or teal is released. In some angles, a verdant green is reflected. Sometimes, it is mixture of the two. It has a red fluorescence in the dark with ultraviolet light. The camera on my iPad is unable to capture any color aside from purple; the other colors won't even be visible on the screen prior to a shot.

What gemstone could this be?

Thank you in advance. 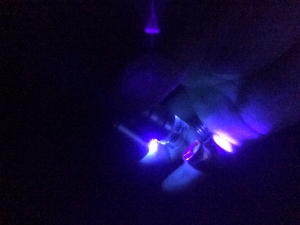 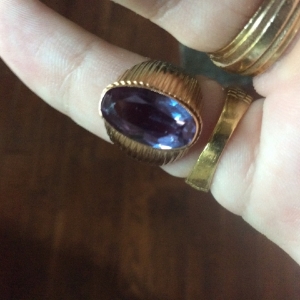 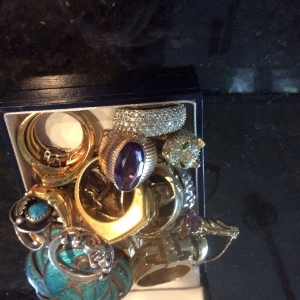 Welcome to Pricescope, OmiStone,
Most people here with far more experience than I will tell you that it's not possible to identify a stone from a photo. As far alexandrite goes, you may want to read this:
[URL='https://www.pricescope.com/community/threads/have-you-really-got-an-alexandrite-read-this-first.179784/']https://www.pricescope.com/community/threads/have-you-really-got-an-alexandrite-read-this-first.179784/[/URL]
Your stone doesn't look like a garnet to me, but I don't know what it could be. Sorry I can't be any more helpful than that.

Given the size and clarity, I suspect it's synthetic. It's a pretty ring!

That is a huge stone and based on your description, my guess is synthetic.
Sometimes the mind ignores what is logical because the person cannot accept the reality of what it is.
You must log in or register to reply here.
Be a part of the community Get 3 HCA Results
Jewelry Blog