I was wondering if anyone knew of a reputable local jeweler in St Louis? If not maybe some place I could go that has a wide selection of diamonds to look at that have been AGS/GIA graded so that I can comfortably buy something from Whiteflash or Bluenile?

I have LOTS of experience going around town to find a decent jeweler. I will first say who I think are not that great:
Vincents on Olive, for many reasons I cannot get into on here, I had no issues with buying the stone, it was the setting that caused all sorts of drama and how they were after that went horribly awry.

I also am not a big fan of Genovese or Michael Herr. I mostly just don't like their attitude. Genovese outright told me they wouldn't work with Platinum when I needed a ring resized...and that it needed to be with white gold. Uh, no it doesn't. I don't know a lot about what certs they have for their stones either but I have seen some nice stones from there. I don't think they do a good job of "educating" people on stones because they actually said "cut" was the shape. No no no!

(someone at) Michael Herr actually had the cojones to say to me "did your dad or husband give you permission to buy this". Way to eliminate a $12000 sale. I may look and sound young but don't speak to me like a child. Especially not after I drove 20 minutes to see you.

I have worked well with Summa Jewelers in Kirkwood--who sell Infinity diamonds--Jim is one of the few Bench Jewelers that is also really knowledgeable about diamonds. A friend got a DOOZIE of a stone at Kodner in Clayton, Saettle is OK though a bit pricey because I think they specialize in Hearts on Fire. L.A. Montell (?) is pretty good too, though I couldn't tell you about what certs are on the stones they sell. Their bench work was just really nice on the rings I have seen. Rock Hill Jewelry is good for platinum benchwork but he's ...not good with diamond knowledge. And frankly some of the things he says are just...wtf?! I really miss Hamilton, they were awesome. I know Bob (the former Hamilton's owner) works now at Saettle.

I actually bought mine from Good Old Gold, and we flew up to NYC to visit them to be sure that I didn't like another stone better.

Go to Jared. There are a few in the st louis metro area. Their "peerless"
line Is AGS Ideal stones.

I would personally NOT go to Shane or Jared if you can. They're much more expensive and they did not have a big selection of stones.

Of course I would not recommend to BUY from Jared. You will overpay. But since their "peerless" line is ags ideal stones, it's the easiest way for many people to be able to see well-cut stones to determine their color sensitivity so they can know what they want to look for online. As the OP stated in his first post that he wants to do. They will have a small inventory of the peerless stones in the store, so you can compare an ideal to non-ideal, a colorless range stone to a near-colorless range stone, and so on.

Why the snarky reply?

I misread the OP and inserted a word.

Yea, if you're just going to buy online, just go to Jared for that then. All the places I mentioned are where I figured he would be able to buy a nice stone locally. No need to waste anyone's time if all you're going to do is see stones to determine color sensitivity.

not being snarky, just didn't want to confuse the OP who is a new PSer.

If there are infinity diamonds available locally than that is exactly where I would buy, though I would make sure the price is comparable the with ones offered on HPD/nice ice. From what i've seen online Jim Summa's work appears excellent. People go online because they can't get the combo of price/quality/service/selection they want at most local places...I fancy Summa's might be an exception to that.

From what I gathered, I am pretty sure that the pricing for Infinity is kind of across the board roughly the same. I got the impressing they were kind of keeping the pricing fairly uniform from outlet to outlet, since they only have a "few" dealers.

I would assume that his diamond pricing is relatively competitive since he knows he IS competing with the internet.

ame|1313765835|2994259 said:
From what I gathered, I am pretty sure that the pricing for Infinity is kind of across the board roughly the same. I got the impressing they were kind of keeping the pricing fairly uniform from outlet to outlet, since they only have a "few" dealers.

I would assume that his diamond pricing is relatively competitive since he knows he IS competing with the internet.
Click to expand...

One of the features of the Infinity line is that they have a system for sharing inventory between the various dealers so if what you want exists ANYWHERE in the system, any authorized dealer in the system can probably get it for you. Among other results of this is that they all have very similar prices to one another whether they're selling online, on the street or both. The biggest differences occur in the setting charges, design fees for custom work, free coffee and other non-gemological issues. Some of them are also representitives for other products, like some of the designer mounting lines or specific makers, and they may be able to bundle a deal for you if you're interested in one of those.
Neil Beaty GG(GIA) ICGA(AGS)
Independent Certified Gemologist Appraiser
www.americangemregistry.com 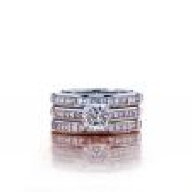 I'll meet up with you and show you my BGD set! lol. It's all princess cuts though.

Oh I am glad the ylang spam post is gone.

That is somewhere I would NOT shop, especially not for diamonds. Its in Frontenac so they automatically double the actual retail price (you can get the same stuff at Pearlmans WAY cheaper!) and the people that work there are SO RUDE.

I've met Jim Summa and was very impressed by him. Infinity has some of the most beautiful stones I've ever seen. If it were me, that would be my first stop. You may not even want to shop at WF or BN after you meet with him.
"So often in life, things that you regard as an impediment turn out to be great, good fortune." -- Ruth Bader Ginsberg

I will wholeheartedly agree. I haven't been in to annoy him lately. I need to go do that.
You must log in or register to reply here.
Be a part of the community Get 3 HCA Results
Jewelry Blog