WASHINGTON—Moving quickly to begin the process of filling the unexpected vacancy on the Supreme Court bench, President Obama spent much of the weekend compiling a shortlist of gay, transsexual abortion doctors to replace the late Antonin Scalia, White House sources confirmed Monday.

“These are all exemplary candidates with strong homosexual values and proven records of performing partial-birth abortions, but am I missing anyone?”
Obama reportedly asked himself while reviewing his list of queer, gender-nonconforming, feminist Planned Parenthood employees, all of whom were also said to be black immigrants.
“I definitely have enough post-op transsexuals on the list, but it is a little light on pre-op candidates.

And I should probably add a cop killer or two on here just to round out my options.”
Sources later confirmed that Obama was attempting to rapidly narrow the list down to the single best nominee to submit to the Senate in hopes of wrapping up confirmation hearings before his choice had to leave to attend the Hajj pilgrimage.

Thank goodness the republican controlled senate will make good on Mitch's pledge to "sit on his hands." This country needs to wait until President Donald J Trump can nominate a white, bible-quoting, wall-building, creationist theorizing, ISIS killing, heterosexual, climate change denying, christian man to be our next Supreme Court Justice!

edited to add: or maybe a corporation will be appointed - they are people too!
~Maria D~

Hahaha.
Maria, do you write for The Onion?

This was a great Onion headline ... 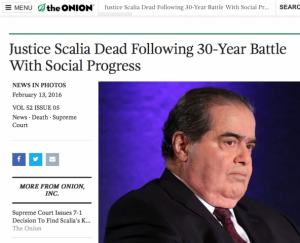 You might say it is tacky they'd publish this so soon after Scalia's death.
"Have they no respect?"

... but Majority Leader Mitch McConnell of Kentucky didn't even wait for Scalia's body to cool before grabbing the nearest microphone to blurt out ...

"The American people should have a voice in the selection of their next Supreme Court justice. Therefore, this vacancy should not be filled until we have a new president,”
__________________________________
"We are all atheists about most of the gods that societies have ever believed in.
Some of us just go one god further." - Richard Dawkins
You must log in or register to reply here.
Be a part of the community Get 3 HCA Results
Jewelry Blog