Not great work by jeweler - what can I do? 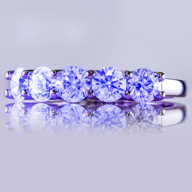 I recently purchased an e-ring from a reputable jewelry store chain in Boston and had a loose stone set in it. The quality of the ring is not the highest - I have had to take it back to them twice for fixes within three weeks after receiving it. Is there anything I could/should do?

When I received the ring, the appraiser pointed out some problems:

* The gallery under the main stone and gallery under one of the baguettes had excess metal that should have been removed. The appraiser said he would not have let the ring out in that condition. My fiancee commented that the side of the mounting felt and looked rough.

I brought the ring back to the jewelry store, which confirmed the issues and their on-site jeweler filed away the solder and excess metal.

A week later, my fiancee noticed that the baguettes were loose. She brought the ring back to the jewelry store, which confirmed the issues and their on-site jeweler tightened the baguettes.

While I appreciate that the jeweler is fixing the problems, I feel like the ring should not have had these issues and that I should take some action. What can/should I do?

Get a refund and go elsewhere to get your setting. Most jewellery chain stores do not sell high quality settings unless it is a big name setting such as Tacori, Vatche, etc.
Sometimes the mind ignores what is logical because the person cannot accept the reality of what it is.

The return policy does not offer refunds on custom orders. And besides, the ring seems fine now.

If it's fine now, and you can't return it, then I'm not sure why you're posting it. They fixed your issues right? I mean, make sure you have good insurance so that if something happens you won't be hooped, but other than that it seems they were very accommodating for you.
You must log in or register to reply here.
Be a part of the community Get 3 HCA Results
Jewelry Blog