Tahitians with green undertones and diamond accents (to match a pendant I already own)!
I've been wanting a pair for awhile. I just accepted an offer for a new job, so I bought these to celebrate!

Sorry for the iPhone pics! These guys are so hard to photograph! I need to get some natural light shots. 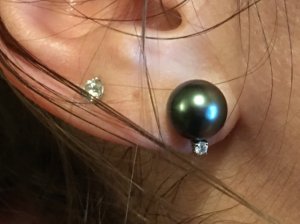 They're beautiful tahitian's. Tahitian pearls are one of my favorites. Enjoy them!

Beautiful pearls and they are a great size on you! Where did you get them from?

Beautiful little studs. Love that green color. Can we see your pendant also?

Thanks, NacreLover! The pendant is not Tahitian. It's a 12mm Ishigaki pearl, which is a cultured black pearl from the Okinawa prefecture in Japan. It's a souvenir my husband brought back for me. It's in 14kt on a fully adjustable chain with a 0.10ct diamond accent. 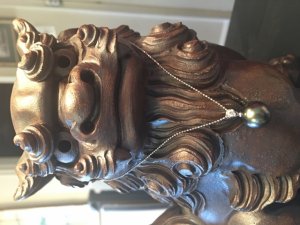 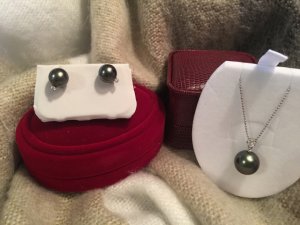 Thanks, Siameseroo! They're from a B&M. I happened to be wearing my pendant and went in w/ DH to see if there were any earrings close in color. Found these, and they were on sale! The color is not a *perfect* match, but they are SO close that they look like they match when I'm wearing them. I really want some peacock Tahitians, too, though!
~LadyMCh~

Very interesting. I tried to look this up but there is little information on them. I wonder if they are just growing the black lipped oysters in another area. If this is the case, no wonder your pendant is such a great match. I know Douglas McLaurin grows some black lips at his farm in the Sea of Cortez Mexico.

Black pearl (The highlight)
A black pearl is a pearl, which is successfully cultivated in this Kabira bay after the test cultivation for 48 years. This pearl that can be produced only to a black lip in a many pearl oyster is called alias-black lip pearl. It was the precious gem used as the Empress's necklace or a queen's emblem in ancient times for the great value. The gloss of this pearl has the peculiar feature of the rainbow pattern with variegated change, such as green, blue, purple, and gold.
After you have taken enough pictures, take a short walk to the left until you hit the pearl showroom. Inside there is a quick display which explains about how black pearls are created. Across the street you will find the Omoto Awamori Factory. You can view the creation process as well as taste the popular okinawan liquor. Club Med can also be found in this area. Club Med is known for its delicious but expensive western style meals.

From "Japancollections" on YouTube: Okinawa used to be the only place in the world where black pearls were cultured. The water temperature, the direction the bay faces and the way the waves crash all help make the ideal an ideal place to cultivate them. The oysters were suspended in the water in baskets and raised every three months to be inspected and cleaned. In the 1960s one black pearl could fetch over $5000. The methods used to raise black pearls in Okinawa and now used to produce South Sea pearls in Tahiti, Australia and Indonesia.

Okinawa prefecture is a collection of islands about 2 hours by plane from the Japanese mainland. We were on the largest and main island, Okinawa. Ishigaki pearls are farmed within the prefecture on another island. Here's a NYT article on the island: http://www.nytimes.com/2014/05/04/travel/ishigaki-a-japanese-natural-wonderland.html

My pendants is from Ryuku Pearl. Most of their info is in Japanese, but you can find some English info, too.
~LadyMCh~

Interesting. I have a facebook friend who grows Lake Kasumi-ga-ura freshwater pearls. I have contacted him to ask if he knows about your farm and the people who run it. Just when you think you have everything you need in your collection, you find there are more pearls in other area's.

NacreLover|1478625244|4095245 said:
Interesting. I have a facebook friend who grows Lake Kasumi-ga-ura freshwater pearls. I have contacted him to ask if he knows about your farm and the people who run it. Just when you think you have everything you need in your collection, you find there are more pearls in other area's.
Click to expand...

Cool! Would love to hear if you find out anything else! I was there and went to two of the Ryukyu Pearl stores, but, since I don't speak or read Japanese, I could only understand tiny bits of the info in the stores. My husband was there longer than me and picked out this pendant from the style of pendants I had been ogling to bring me as a gift. I think he did pretty good!
~LadyMCh~
P

I love this look!
Can you show more shots of the earrings from the front when worn?
I also love wearing a small diamond stud on the top piercing and a pearl on the bottom. Very classy look IMO

LadyMCh. Well I heard back from the pearl farmer I was telling you about a few days ago. He knew the farm but had no idea what type of mollusk they were using to create the pearls. I will inquire further and ask others.

I got another message this evening. He is going to inquire and will tell me what he finds out.

Black pearls are said to be naturally grown at a ratio of only one per 400 thousand black-lip pearl oysters, and have been legendary famous from ancient times and loved by royalty and nobility because of its rarity.

Kabira Bay of Ishigaki Island, the southernmost tip of Japan, is the northernmost black-pearl-producing place in the world, and the home of Susumu Tokashiki, a pioneer who established the technique of black pearl culturing for the first time in the world.

All of our black pearls are cultured by hand from carefully picking mother-of-pearl shells and inseminating to helping grow healthfully to be beautiful pearls.

Seasonal change of the water temperature in Okinawa slowly adds delicate nacreous layers to the pearls to be unparalleled black ones with mysterious rainbow color and the finest luster.

Black pearls and south sea pearls are produced by continuous research and efforts. The quality has been maintained by inheriting the pioneer's spirit.

Wahh I was in Okinawa earlier in the year, if only I knew these pearls existed I would have checked them out!
K

Well those earrings are gorgeous ! But I found all the information to be super interesting ! Well done Sleuthing Nacrelover !
Pearlzaustralia