this post is regarding my ering that i have tucked away till june, ok lets make a long story short last xmas i bought my girlfriend a tiffany''s silver mesh ring i think its on there somerset collection, well..i got it on a size 10 and for everyone who havent seen this ring before its a wide band. when i was in the market for my ering i was told that a band that is wide you can wear a bigger size. the reason why i''m saying this is because i got my ering in a size 9.75 which is a way thinner band, i have the sleek line legato with pave band i think its around 2.5mm .. i got a scare the other day because my gf was having a hard time taking her tiffany''s somerset ring off because she said her fingers were swollen and it was her ring finger. we will be going to hawaii in june with hot humid wheather and maybe a great chance she might swell up again, do you guys think i should resize it to a 10 or keep it a 9.75 because its a thinner band?. i went with a 9.75 because we got her finger sized but it was almost 2 years ago..so i went with that, do you think her size would change from then till now? i would love everyones feedback...im kinda half awake so if my post doesnt make sense let me know and ill try to make it more clear hehehe

Unless she has gained a lot of weight since the last time her finger was sized, I would stay with the 9.75 for now.
The truth is incontrovertible. Malice may attack it, ignorance may deride it, but in the end, there it is." - Winston Churchill​ 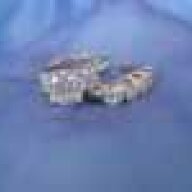 I agree I would leave it alone you can always resize it later. The mesh ring is very wide so it might be tight more towards the knuckle where the ering will sit low on her finger. A loose ering will spin and that gets annoying really fast. It sounds like you''ve put alot of thought into this. Good luck with your proposal

Stay with the 9.75...resize after Hawaii if necessary. It wont hurt her to wear the ring a little on the tight side
for a short period of time. I just got a new ring and its a 6.5. I really need it to be a size 7 but I didnt want to
give it up to the jeweler so soon after I just got it. So, anywho, its 1/2 size too small but that isnt really even
bothering me. I''m just too excited to have it and I''m sure she will be too!
~~~Thanks to PS, my wants far exceed my budget!~~~