I've been in the process of customizing a ring with DK and I've hit a few snags.

The inspo is Miley Cyrus' ring by Neil Lane (instead of an omb, I'm going for kite set cushion), and a few other components from others that I'll add.
I've got the latest CADs, and received the model.
I think in my excitement, I loved it.
But now I feel like something is missing. Or needs.... not "fixing", because while I *do* like it, the love factor wore out a little.
I dunno. I feel picky and indecisive.
Does that make sense?
I guess I'm asking for opinions.

I do know that I'd like more metal between finger and stone.
I'm not sure about the prongs.
I don't know why I see fishtail in my mind.
David suggested tear drop claws, and I think it is suitable.
I'm also not sure about the engraving.
I'm leaning towards a scroll sweeping look.

Oh and it'll be platinum and 8.8 mm. Not sure if that'll affect or help anyone's opinions.
Sorry if I sound crazy.

I think it would be a mistake to set the stone too high. I think they have the height right. I think tab prongs are right for that setting. I really like the Neil Lane ring a little more than the sides of that other. I think the cut out parts help it look less chunky. Here's another with that setting design but with a smaller center.

Is your stone an antique cushion? Is it a perfect square (as in all sides exactly the same)? Can you show us the stone?

Honestly, DK is wonderful if you want something they have made before or if you are excellent at design yourself. But I don't think that CAD looks as good as Miley's ring. I think that's why you don't have replies yet. It's a lot of work having to act as designer yourself to get it right.

diamondseeker2006 said:
But I don't think that CAD looks as good as Miley's ring. I think that's why you don't have replies yet. It's a lot of work having to act as designer yourself to get it right.
Click to expand...

Ring design threads usually go in one of two opposing directions here on PS... Either they get extremely few replies or they're inundated with replies. Either way, PSers who are permitted to respond are neither professionals nor designers, so the value proposition is questionable - is it better to have no non-designer, non-expert opinions or dozens?

Your best bet at this point is to solicit professional input. Ask if DK has a design resource whose time you could buy or beg.
Some circumstantial evidence is very strong, as when you find a trout in the milk.
~H.D.Thoreau 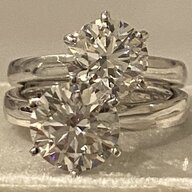 I would keep it low. I personally like the CAD. I definitely do not care for the 3rd photo: Too high, too much going on, I think it will be topsy-turvy and will be a problem sitting upright. Too bulky. I like the more simplistic nature of the CAD. Keep in mind that in platinum, even if totally identical to inspiration ring, it will look very different than a yellow gold version. You aren’t going to have the contrast. Don’t feel like you are are being crazy, indecisive, or picky. Going custom is such a leap of faith, expensive, and stressful. It’s a process and it’s rare that the first (or subsequent!) CAD will nail it. There are often a number of incarnations until it feels right. Better to take the time and get it the way you want it and feel you’ve covered all aspects than to be disappointed with the final product. And, on that note, you still may be a little taken aback when you finally get the ring. But don’t judge at first (unless you love it, of course!)... give it a little time to get used to it and give it a chance. Sometimes something doesn’t come out exactly as we’ve envisioned it, but be open to loving something else. 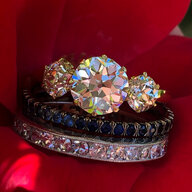 Is this Neil lane ring a production item? If so - have you tried it on?
I think you seeing it in person on your finger will answer many of your questions.
And
If you like that exact ring - you’ll have to decide if you want that exact ring and buy from NL, or you’ll be ok with the changes DK is implementing or you can be more sure of where differently to lead him/his designer?

I do know that I'd like more metal between finger and stone.
Not sure what this means..."more". More than is already there in your CAD or more than the MC ring? Are you saying you want
more open space then what the CAD currently has (more like the MC ring)?
I'm not sure about the prongs.
I don't know why I see fishtail in my mind.
Do you have an example (photo) of fishtail that is not on the corners since you are doing N/S/E/W?
David suggested tear drop claws, and I think it is suitable.
I know what a claw prong is but not sure what a teardrop claw is...again, an example would help.
I'm also not sure about the engraving.
Look at DK's rings on IG and find one that has engraving that you like. A picture is worth a thousand words.

Welcome back to Instagram. Sign in to check out what your friends, family & interests have been capturing & sharing around the world.

www.instagram.com
I'm leaning towards a scroll sweeping look.
~~~Thanks to PS, my wants far exceed my budget!~~~
T

I'm trying to figure out how to respond to everyone without tons of posts, lol.
Never felt more electronically illiterate.

Diamondseeker:
I appreciate the feedback.
I agree that the original tabs look right at home on that setting.
I'll have to dig up the exact dimensions, but I don't think I'm allowed to post my stone in this section. It's from August vintage and cushion cut 8.8.


Yssie:
Thank you yssie, I was worried about that. Just wanted more opinions as all I have are my husband's. Family/friends are biased, so I'd rather ask you lovely folks that appreciate jewelry.

Headlight:
Reading that was relieving.
You don't think it looks a little squat?
I only used yg images for the contrast, but I will heed that, thank you.
This is the third round of CADs. Lol.

You ever go get a haircut and it's not what you want, but you don't exactly hate it?
I don't want that here, so I'm waiting after each step.
I genuinely did love the model...I'm just feeling iffy now.
A reason I wanted it raised a little is so that a band can be worn with it.
And I'm wondering if that hesitation is enough to make me want to give it a lift. 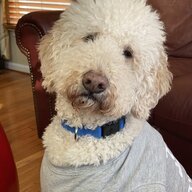 I always commend people for going custom. It’s art and a wonderful way to express yourself in jewelry that you wear.

The CAD looks great to me, but I’m not a designer. The anticipation of the project would kill me. I’m far too impatient. Lol GL! I hope it turns out exactly the way you want it.
You must log in or register to reply here.
Share:
Facebook Twitter Reddit Pinterest Link
Be a part of the community It's free, join today!
JEWELRY BLOG