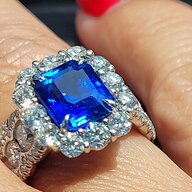 I bought this for resale since I thought ovals were so popular now and I could make a little $, however, I just can't part with it! Even with it's dark inclusions, I just love it! It is a .60 with a really nice spread that appears to be closer to a .75ct. It is stated to be S1 clarity which is something my 55 year old eyes would say but a younger set of eyes would say more of an I1. Usually it would bother me having a lower clarity but it explodes with such fire that it doesn't. It is haloed with E-Fcolored and VS clarity diamonds in 18kwg. I wear a size 5.5 but this is a 7 which I may keep it that way because it looks so great with my other bands!

LIFE IS NOT ABOUT WAITING FOR THE STORM TO PASS, IT IS ABOUT LEARNING TO DANCE IN THE RAIN!

it’s so pretty, I can see why you don’t want to part with it.
A pet may be only part of your life, but to them, you are their everything.

Austina said:
it’s so pretty, I can see why you don’t want to part with it.
Click to expand...

Thank you! Those pics are enlarged enough that you see the inclusions but I swear in real life........ they really are nicely hidden!
LIFE IS NOT ABOUT WAITING FOR THE STORM TO PASS, IT IS ABOUT LEARNING TO DANCE IN THE RAIN! 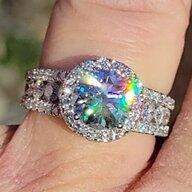 Very pretty and looks great on your finger.
O

That is a very pretty ring with a lot of sparkle to it. I love the lemony color and your bands look amazing with it! I would want to keep that too. 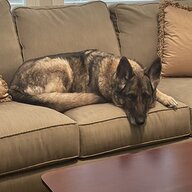 I like it - it looks like it has a lot of 'character' and is visually interesting!
I am not an expert - all comments are IMHO! If you see me talking nonsense, please do quote me and challenge it