I apologize in advance if this is a bit long!

I want to relate my diamond buying experience in the hopes that it might help someone who is on the search for a beautiful diamond engagement ring, and also to thank my fellow pricescopers!

As a precursor, before I found pricescope, I checked out several jewelers on ‘jeweler’s row’ in downtown Chicago (including New York Jewelers). I also visited several large chain stores, including Georg Jensen, Cartier, Tiffany, several maul stores (Zales, etc.), and the one I came closest to buying at was Fey Jeweler’s in Chicago (family owned, three stores… has a tiffany’s like feel w/o the huge markup, carries beautiful settings and nice stones too). Most of the merchants I visited on jeweler’s row were very nice, patient, and not too pushy but they all *definitely* had an edge. Most of them had average diamonds that were generally attractive but nothing that was really impressive. The frustrating thing was that every new place I went into, I got the ‘4 c lecture’ over and over, verbatim almost, but with slight variations, but with no one telling me the real answers I wanted or not really telling me the basic truths. Now, I’m one of those people who enjoys being an educated consumer, (or prosumer as Gary calls them!). I had already saved up $8k and didn’t want to throw it away by trusting some random merchant on his idea of a good diamond. I wanted to be confident that the purchase I was making was worth it!

Then I got on my computer and somehow found pricescope! Lucky me. I learned all about cut, clarity, and color in a way that I had never been educated by any of the merchants. I found that I wasn’t able to find exactly what I wanted without increasing my budget a bit – which I was happy to do *now that I was more educated about the purchase*

I learned of Whiteflash, James Allen, and good old gold through pricescope. At first, I thought good old gold’s interface was a little cheesy, but they really had the most amount of information online for each and every diamond – very impressive! I called James Allen and Whiteflash and explained what I was looking for. Both Bob at James Allen and Tracy at Whiteflash were very helpful, kind, and well informed. I (through the help of pricescope users..thanks avlis!) found a beautiful diamond on Good Old Gold. When I called, Tim at GOG was awesome, patient, and answered all of my questions. I had him pull the stone and give me his very honest impression with it. I put down the deposit and arranged for my credit limit to be increased (buying on a credit card is definitely worth it for security’s sake).

At the same time, I read the post with the collections of settings and I found myself really drawn to Mark Morrell’s work. I read everything on his website and enjoyed his obvious attention to detail. I called him to speak to him about a sunburst solitaire. He was phenomenal! He wasn’t pushy, or rude, or impatient. In fact, he went the extra mile for me without me even knowing.

When I sent in the diamond for setting, I also sent him a sample ring to use in order to size the e-ring against. It was a cheapy sapphire ring in yellow gold that my girlfriend wears on her left ring finger sometimes. I sent it via U.S. Post, and when it was received, it was totally crushed and bent with the stone fallen out of the setting. Two weeks later, Mark sent me the completed SunBurst e-ring (with pictures beforehand!)… and when I received the gorgeous SunBurst, I also received the totally re-furbished sapphire ring! He had re-formed it into a size 6, re-set the sapphire, cleaned the ring, and polished it! All this knowing that it was a cheapy ring, not worth his time, but he wanted me to be happy. The SunBurst is gorgeous. I can’t speak highly enough about Mark Morrell’s work and Mark Morrell individually. It is truly a work of art. I am pleased that I got a diamond that I am educated about, and a setting that I love from a custom designer. My (soon to be fiancé) and I will definitely be going back to Mark for our wedding bands.

So, I just wanted to write a short thank you to all who helped to educate me and encourage me to buy the right diamond & find the right designer for the setting! Special thanks to Ellen, Belle, Kenny, Jazmine, JulieN, mssalvo, diamondseeker2006 and definitely to Avlis, who was the one who actually found the winner! And of course thanks to all the other venerable users whose posts I read over and over in order to learn the basics of the trade.

As promised, I just posted pictures of the ring in the ‘show me the ring’ forum. Here’s one for kicks

So glad you had a great experience! The ring is gorgeous!!! She''s going to LOVE it!!!
K 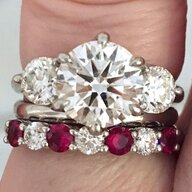 Please come back and post some hand shots!!! Also, do tell the proposal story - I just LOVE a good story with a happy ending!!! Congrats!!!

Congratulations! Your (soon to be fiancee''s) ring is gorgeous! I love Mark Morrell''s work!

kev, how awesome is that, that Mark fixed your ring for you?! Talk about going above and beyond...

Stunning ring, as I knew it would be. We''ll be waiting for those hand shots!


And glad I could be of help, this is what I love about it.