My Adventure in Pictures

, which turned out so long I think very few people made it through the whole thing. No problem, I knew when I posted it that it wasn''t for the casual reader. So, this post is to show off a couple of pics of the ring my fiancé now wears on her finger.

The diamond is a SuperbCert .78 ct. D, VS1, and is set in a very basic Stuller 18KY gold band w/ six-prong platinum head "classic Tiffany" setting.

This is my first attempt to show pics. Let''s hope it works! [/u] 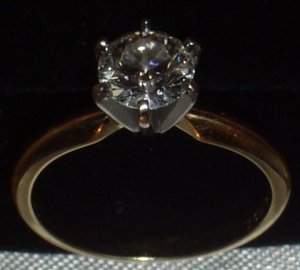 Here's a nice little flash of FIRE! I love to watch this thing sparkle. I'm quite jealous of the diamond, really.... 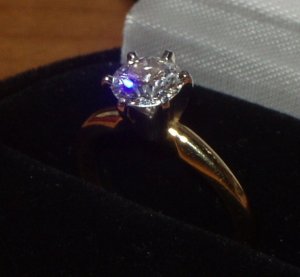 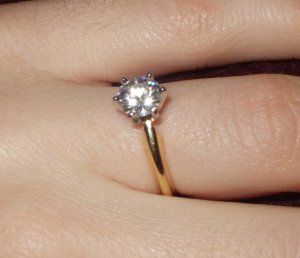 A "mugshot profile" of the ring... 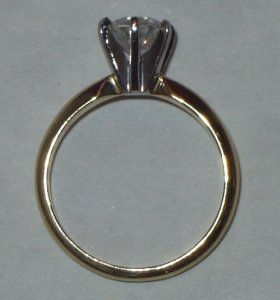 And, we'll leave off with one more little hint at the fire of this ring. 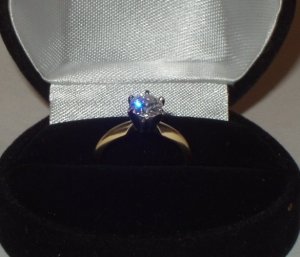 Did I go overboard? Hope not, but on the other hand, I've been showing the world, why not the folks at pricescope too?!?

This concludes this test...
"Economy of words has never been my strong suit"
J

And the crowd goes wild

Can you direct me to the site of the ring provider? It looks similar to what I am looking for and I'd love the check out their range.

Thanks for the compliment! I'm really happy with how the ring turned out, and I can tell you that my fiancé will barely part with it long enough for me to examine it (I still feel compelled to play with it occasionally).

I purchased directly through Barry (I'd recommend him to anyone).

When my jeweler received the setting I had a look at it and thought the prongs were a bit higher off the ring than I'd like, so I asked him to set it "as low as possible" in the prongs, which he did a fantastic job accomplishing, so the prongs in the pictures I've posted are actually a bit shorter than you would expect to see in a "stock" version of the ring.

Btw, I ended up paying less than $250 for the ring (including having the stone set), so another bonus of this setting is that it's quite economical relative to a lot of engagement settings.

I'll have to fix that...
"Economy of words has never been my strong suit"

How did you snap the shots? I am hoping that once we get our ring finished and it's official, I can take some pictures fairly easily with my digital camera. It's a Sony P71 with 6x optical zoom and can get in pretty close, but I might do a magnifying glass if I can't get sharp shots. I'm still learning how to use the camera with closeups but since it's digital, I can see fairly quickly what looks WRONG when enlarged, thank goodness...not like film.

I really like Stuller's settings as well. We were considering one that is similar to one that another poster had..he bought the diamond from Rhino at GOG and then they posted the shot on the product page at GOG, it was a split-4 prong head on a basic solitaire setting similar to yours. It was gorgeous! I think the stone was a H&A or maybe an 8star. Stunning.

Note: Had to resize that "test" picture above to fix the margins in this thread, so don't be surprised if it's much smaller than it used to be. The test was a success though, and I now see that it's possible to post a 400KB+ picture (as long as it's hosted on another site).

Thanks for the kind words, Mara! I'm glad you enjoyed the pictures!

had some pretty incredible pyrotechnics).

The few pictures that I posted were the best of maybe thirty or forty shots I took with the digital camera. Several of them came out over/under exposed or blurry, but a few came out pretty well. I think it's safe to say that if I had been using up film, I would have never kept trying for the good shots. I agree with you that it's awfully nice to have those benefits that come with being able to snap pics without wasting film.

I think the best pictures I took were the result of using the "macro" (close-up) function of the camera in conjunction with the longest optical zoom possible with the Olympus (3X). The ring was at a distance of probably 10 inches or so, and the zoom was cranked all the way. I tried a combination of flash photos and ambient incandescent lighting, but the flash pictures seemed to come out the best. I'm still planning on taking some more pics using some halogen lights I have available, so more pictures may be coming.

I would caution you that, like my fiancé's Olympus, your camera appears to have a 3X optical, 2X digital zoom (for a combined 6x "digital-enhanced" zoom level), so you'll probably want to stay with the 3x function to ensure the best image quality (this is based on a quick browse of Sony's site to get the zoom specs on the P71). I say this because optical zooms actually "get you closer" to the subject, while digital zooms essentially just narrow the field of view, so the pixels just get bigger and clunkier with no real image enhancement. Since your camera is a 3 megapixel model, there's a good chance you may even be able to get sharper pics than mine without too much effort, assuming your macro function allows you to get nice and close to the ring. Additionally, if you get really creative you may be able to monkey with the shutter speed and get some nice shots without using the flash at all, which may lead to some interesting results.

As far as the Stuller setting goes, in all honesty I sort of just stumbled across it during my diamond search. I was at a local jewelry store and had finished up looking at their on-hand diamonds (no winners there), and was browsing the settings they had in the display case when I saw the Stuller model. I knew that my fiancé wanted a plain/simple yellow gold setting, and I have my own fondness for six-prong Tiffany's, so when I saw the setting in the case I immediately focused on it. The one they had on display was 14K yellow gold with palladium prongs so I didn't get that one, but I took down the model number and asked my normal jeweler to order it in for me in the 18K/platinum. I really like the look of it, and at under $250 for 18K/platinum (including setting the stone), it's hard to knock. Sometimes I think the prongs are a bit on the beefy side, but I think that's a result of me asking to have the diamond set so low in the setting. Besides, having that much platinum holding the diamond securely in place gives me a little extra piece of mind, so I don't mind it too much. She loves it regardless, which is really what's important....

That's all I have. I look forward to seeing some pics of your ring when it's finished! I don't have a whole lot of photography experience, but be sure to let me know if I might be able to give you any tips when you get ready to preserve the ring in pictures.

Thanks very much for the kind words. It was a pleasure dealing with you.

You're right about the pictures. It is difficult to
capture the pictorial essence of diamond over the internet.
With new technology it will get easier.

Nice pics! Fyi, I used the sunlight on my balcony to get the cool spectral effects. 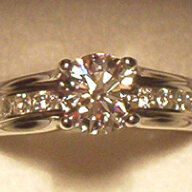 Excellent pictures. I wish I could get the clear pictures you got.
You got a steal on the setting, great find!

"A picture says a thousand words"
Much better then we do.....
May the feeling that you have today
Last your whole life through!

Beautiful ring and diamond!! Do you have any other pic??

Thanks everyone! Wow, I'm surprised to see so much new life in this thread from so long ago. Thanks!

I couldn't have asked for a better segue than your question! Leonid may start to get upset at my pics cluttering up the servers but I have a fresh batch ready to go, so now seems like a good time.