So I''ve been going into Jewelry Stores to ask for AGS0 Princess, and I''ve been communicating back and forth with a certain sales person and she was suppose to call me. The phone rang and it was a man on the line. He said Jane* asked him to call and talk to me because she is busy with another customer. Fine. I just needed the specs on some diamonds she had found for me. Unfortunately she couldn''t fine any AGS0 Princess, but she had 4 other AGS princess. He got curious and asked me why I would only consider AGS and went on about how GIA ex/ex is equivalent. I told him that I''ve been reading a lot about Princess Cut Quality on the internet and I know about Light Performance, Proportions, ASET/IS images.

now, I''m a newbie, but I am pretty sure I''ve read and learned enough from pricescope experts to be comfortable with what I tell the jewelers. Back to the story, I told him that GIA does not do Cut Grading for Princess cuts and that they only do that for Round cuts. He had the nerve to tell me that I can''t trust information on the internet, and that I should go to the GIA website to read about Grading Cut. He said GIA do grade Cut for Princess, and it''s a factor of Symmetry and Polish.

I will print out the Grading Cut info from the GIA website and highlight "GIA provides a cut quality grade only for standard round brilliant diamonds...," then I''ll ask Jane for the name of that person and shove it in his face. 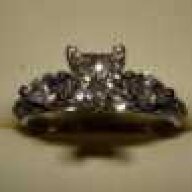 Try and not take them personally, almost all B&M stores (especially the ones that have not heard of Pricescope) are all like that. I had prepared myself for the exact same experiance as you have stated when I went to Jared. Just have fun with them as I did.....


My experience at Jared
It has been an interesting and fun experience when I shopped there. I did however spend months researching diamonds/settings, cost, and how B&M stores really work. I had also previously purchased a beautiful princess cut diamond, with terrific Aset-scope images, from an online retailer, as I didn’t have a large enough budget to overpay for the most expensive part of a ring at a B&M store.

In the early spring of 09’, after many discussions about getting married, my “now” Fiancée had the urge to take a look (experience) at what it would be like to try on a couple of rings at a jeweler. She of course was looking at a very large Jared store as she said that. I then thought she might get a thrill out of it, so we stopped in.

As many of you know, the layout at Jared (not the mall version) is quite immaculate. The store is very large, bright and vibrant, with dazzling jewelry sparkling all which way, not to mention the “high-class” feel you get as soon as you open the door. A place like that can be quite intimidating if you have not familiarized yourself with all the aspects on jewelry and B&M stores.

As soon as we walked in the door we were greeted and helped right away by a gentleman, who he said to be, the most knowledgeable person there. He then proceeded to start showing my Fiancée some of the more popular settings and worked with her very patiently. He did seem to be a bit sarcastic to me when I attempted to inform him that I actually knew something about diamonds, but I let it go because he was treating my Fiancée very well. After about 15min or so, I noticed my Fiancée was starting to get very nervous and overwhelmed at the fact that this is actually happening to her, and she will actually be getting engaged.

THEN IT HAPPENED! She found the perfect setting that she just could not keep her eyes off of. I knew that setting would be the setting that I would have to work with no matter what diamond I had to get for it to make it look beautiful. I then asked him if they were able to set my princess cut diamond in that setting, which was specifically designed for a round cut. He then stated, “we should be able to, but why don’t you take a look at the setting with one of our diamond on it first. The one I am going to show you is a princess cut diamond with the corners cut off”. I was thinking to myself, “that sounds strange?” Then, when he pulled the diamond out and dropped it on the setting, I blurted out, “It’s a Radiant cut!” He then stated, “ It is the same thing as a princess cut, but better, because looks bigger when placed on the setting.” I didn’t even bother opening my mouth, as I was in a good mood and just phased out his sales antics, not to mention I was not even able to afford this 1.1ct mediocre radiant cut diamond, which costs significantly more then the diamond I had already purchased.

I then came back to the same store the next day with my princess cut diamond, after getting no sleep the night before from thinking about the setting. As I walked in, I noticed something very peculiar, I was not helped nor greeted by anyone when I walked into the store alone. I kind of assumed though, since I did not have a woman with me, that they thought I would not buy anything anyhow. So I did what any immature guy would do, I decided to occupy my time by playing around with their scopes and lights that were lying around the counter. I was then of course greeted right away “May I help you!!” J I then told her that I wanted to buy the setting that I had looked at the previous day and gave her the stock number.

As I was waiting for her to find the setting I observed some of the other couples that were looking at rings. Of course the women seemed very ecstatic, but the men looked as if their eyes were ready to role out of their sockets after reading the price tags on the diamonds they were shown, at which time they were being told about the infamous “4Cs” and being reassured that they were getting a great diamond and a great deal by coming to Jared. I guess that is a matter of perspective isn’t it?

Well anyhow, she found the setting and asked if there was anything else she can do for me before she rings it up, “sure, why not!” I just HAD to compare my diamond with their prized Peerless diamonds, as I couldn’t resist. She then took out one of the Peerless princes cut diamonds and set it up next to mine under their diffuse lighting box. The fire and sparkle scintillation seemed to be almost equivalent. I of course had to boast and stated that my diamond looks just as good. Then, without even looking at them she said, “no, our peerless diamonds are rated AGS0, it’s a much better diamond.” I didn’t even attempt to argue with her, as I just assumed her knowledge of diamonds are just based off of only what she has been told while working at Jared, where no other diamond in the world can compare to a Peerless diamond. Not a big deal.

As she rang it up, somehow the (3rd party) appraisal that she told me about and the additional engraving that I asked for came up as free of charge. I figured that was fair, seeing as I probably paid a bit more then I should have anyhow for the setting.

When I came back a few weeks later to pick it up, everyone at the counter were amazed at how great the princess cut looked on the setting and how much the ring sparkled. I was VERY HAPPY…The End.

Jason - your ring is lovely. Glad you had such a good experience

Ya, I had fun just listening to the empolyees there

. You should have heard what the "most knowledgeable person" working there was telling me about diamonds. I was hardly able to keep in my laughter.
L

Jane mentioned the square Radiant to me too, but I interrupted her real quick before she tries to dazzle me with it. When I was talking to the guy over phone, he kept going on an on about their Radiant diamond. I just told him that it sounds nice, so I will look it up online. NOT!