Lun Lun, the prolific giant panda at Zoo Atlanta, is expecting twins, for the second time.
As of August 22, those two fetuses measured 2.68 centimeters, and 2.19 centimeters.

Lun Lun, who turns 19 on Thursday, is the mother of the only pair of giant panda twins in the U.S., 3-year-olds Mei Lun and Mei Huan. While giant pandas often give birth to twins, usually only one cub survives because the mother tends to nurse only one of the pair.

After the birth of Mei Lun and Mei Huan, Zoo Atlanta’s veterinary team performed a miraculous sleight of hand, by steadily replacing one cub with the other in their mother’s embrace, giving each a chance to nurse and bond.

The result: Atlanta has the only pair of panda twins in the U.S.

The zoo hopes to perform the same miracle with these two, but there are many obstacles ahead, including a successful birth.

Round-the-clock birthwatch began on Monday, but there is still no certainty. The zoo said in a statement, “fetal reabsorption is not uncommon in giant pandas.” Lun Lun has given birth to five cubs, three of which live in in China at the Chengdu Research Base of Giant Panda Breeding.

Lun Lun has been trained participate in ultrasound exams, but her participation is “voluntary,” the zoo points out, so additional ultrasounds aren’t a sure thing either. 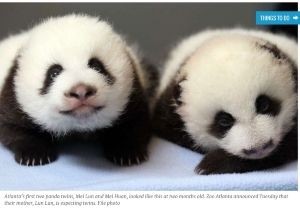