Kenny's DSLR 101, or getting more from your DSLR

I accept that phones are today's cameras for the vast majority.
This thread is not about smartphones.

I've notice some here own DSLRs, but just leave them on AUTO because it's not obvious or intuitive how to use their DSLR's many features and controls.
Taking a DSLR off AUTO and controlling things yourself can quickly get overwhelming.

But leaving it in AUTO is like owning a Ferrari but never driving it over 20 MPH even when you're in a hurry.
But some extraordinary pics require you 'drive at 160 MPH'.

Over time I plan to post several "lessons".
My goal is to write stuff so it's clear to everyone.
When I fail, please let me know and I'll do my best to clarify.

Honestly I don't know how to use many of my Nikon D810's features - though it is a very high end camera.
It's just over the top how many things these gizmo can do, and I have never needed many of the features.
When I wanna do something new I read the manual and/or google up help sometimes via a video.
If your camera's owner's manual is not handy, google up its PDF file and save it somewhere handy.

Understanding the basics will let you venture beyond the limitations of leaving your DSLR in AUTO mode.
Point and shoot cameras have been around for 120 years, and they are fine.
But I'd like to get folks who's DSLRs are stuck on AUTO to take their photography to the next level.

As with your eyes, a camera's sensor needs the right amount, not too bright, not too dark.
Most cameras do a pretty good job of doing all the thinking and adjusting of light on AUTO.
But good photography is about much more than getting a good light exposure to make the sensor happy.
The 3 things that control the amount of light ALSO offer specific creative controls that have nothing to do with the correct light exposure.
In the lessons ahead I'll teach you about these.
Then you can use these effects to take pics that do a better job of telling the story in your head.

Here we go.
There are two ways to control how much light gets into your camera.
Once the light is in the camera there is a third thing that manipulates the light that does get in.
I'll number them, 1, 2, and 3.

1. Shutter Speed is how long the shutter stays open, letting light reach the camera's sensor.
A longer shutter speed lets in more light.
For example a shutter speed of one full second, lets in twice as much light as setting of half a second.

2. Aperture, or f-stop, is the size of the adjustable hole in the lens
The hole's size is expressed as an "f-number", for instance f 4.
Unfortunately the f numbers go backwards; the larger the f number the smaller the hole.
For example f 8 is a smaller hole than f 1.4.
Wikipic: 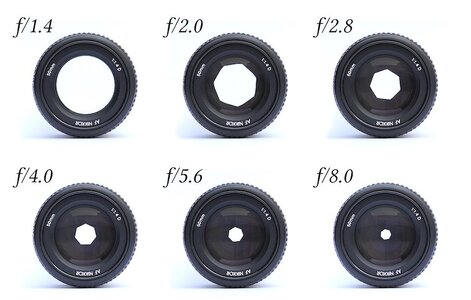 3. The third thing that manipulates the light that the Shutter speed and aperture lets into the camera is called ISO.
I think of ISO as a volume control (or electronic amplifier) but not for sound, for light.

When there's lots of light you set the ISO number low, like 64, for the pics with the least fuzziness, grain, or noise.
When the light level is low you may want to set the ISO number high, like 10,000 or more, to 'amplify' what little natural light is there, which usually gives you an overall more pleasant-looking pic than using a harsh artificial flash to crank up the light.

As with audio equipment if you turn the volume up too high you'll hear background noise in the quiet parts of the music, and distortion in the loud parts.
It's very similar with cameras and light - even the most expensive cameras - it's just the physics of the limitations of even the finest camera sensors.

The human eye can resolve a much much wider light range from bright to dark than can any camera's sensor.
That's the whole reason for cameras having these 3 light-controlling features: Shutter speed, Aperture, and ISO.

Just one thing to add - some modern point and shoot cameras have a fair amount of manual functionality too! So even P&S owners can play with some of these settings!
Some circumstantial evidence is very strong, as when you find a trout in the milk.
~H.D.Thoreau 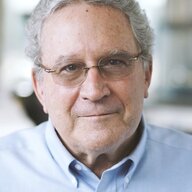 While I agree that going beyond F16 can cause a picture to be "softer", there are times when it works wonders. Here is a shot at F22 to bring out the sunburst effect. Taken in 2018 at Stanley Lake in Idaho. 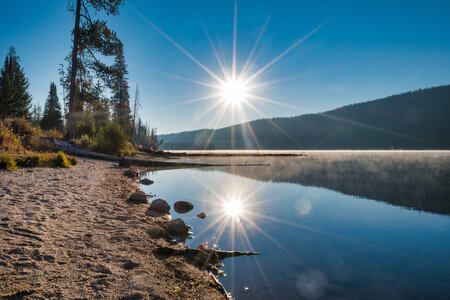 A few jewellery pic specific tips for using a point & shoot with some manual functionality Hope you don’t mind the additions Kenny!

- Want to catch fire? Bump f-stop up! As Kenny explained earlier - this works the same way as your pupil: A smaller “pupil” (whether that’s a human eye or a camera eye) has better odds of catching a single dispersed wavelength. This is also why your eyes see more fire in sunlight!

- Camera autofocus has a habit of using contrast to peg focal length. That’s why you get flower pics where the petal outlines are sharp and the bling is blurry. Especially when aperture is larger (shallow depth of field). If fiddling with manual focus isn’t your thing, or your camera doesn’t have the feature, try tricking it to focus at the right depth by holding a popsicle stick patterned with zebra stripes or polka dots (anything contrasty, colour it yourself!) right above the front of your ring - and half-press the shutter to lock focus and exposure. Then toss the stick and take your pics like normal.

- Losing natural light? Put on a white shirt and you’ll buy yourself another fifteen minutes without bumping ISO or pulling the tripod out.

- Want a soft romantic blurry background but it’s too bright to open the aperture enough to get it, even with ISO way down and shutter super fast? Many cameras have built in ND filters! And if yours doesn’t - your sunglasses will pinch hit! The canonical use case is photographing a waterfall on a sunny day.

- Ever noticed that it’s kind of impossible to get flattering pics of most gemstones when they’re sitting on a white piece of paper, even if you adjust with basic colour balance settings? Try using background materials with lower “brightness” (which in the paper world specifically measures blue light reflectance, 457nm). Paper towels, linen napkins, the brown cardboard backs of notebooks (this is what I use!) will all be more flattering right out of the camera than white printer paper.

For reference I use a number of Canon P&Ss - mostly a G7X MII.
Last edited: Jul 24, 2021
Some circumstantial evidence is very strong, as when you find a trout in the milk.
~H.D.Thoreau

I could have saved myself $7.99 if you had posted the popsicle trick a month ago. I can take pretty good photos at the office with my light box and camera setup. However, I was playing like a third string backup with my cell phone when it came to getting my diamonds or jewelry in focus for a quick impromptu shot.

A friend recommended Camera+ 2. It is pretty cheap at 7.99 and allows me to manually focus and shoot.

Your advice was all spot on, especially about not using white paper as a background.

You can get the vast majority of shots with a modern DSLR by going into AV mode and using the aperture control to control dof and let the camera take care of the rest.

Works well with most advanced p&s also but you have to be real careful they stay in a usable iso range or use auto flash.

Some cameras will not use a high enough shutter speed in AV mode for sports and moving objects but TV aka Shutter Priority Mode mode will handle most of that.
Set a high enough speed and let the camera figure the rest out.

Learning the ins and out of those two modes will handle a very wide range of shots without getting overly confusing.

Middle/center spot focus point)different names in different cameras) if available is real nice for ring or flower pictures.
Just be sure to put it into normal mode for shots of moving objects or groups of people.
Karl aka strmrdr, Diamond Designer
You must log in or register to reply here.
Be a part of the community It's free, join today!
Jewelry Blog