i'm done after this.

Ok. this is the one 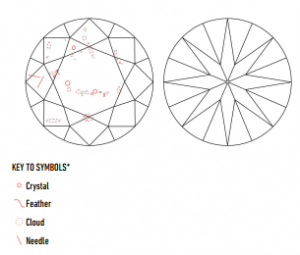 So you saw it in person? Do you have magnified photos or a video you can show us? How about link to the GIA report?

yes, I saw it in person.

sorry, i dont have any photos or videos, yet.

My concern is in the comments:

Additional clouds, pinpoints and surface graining are not shown.

So it has all the inclusions plotted on the clarity plot plus additional clouds, pinpoints, and surface graining. Honestly I would be a little concerned about the clarity affecting light return. Who is the vendor/jeweler? Will they evaluate that for you? Do they have a return policy in the event you get an independent appraisal?

So, yes, I saw that in the comments. After the 2.5K SI2 I bought and returned on JA, I'm attuned to the grading comments.

I was looking at the stone compared to a smaller ~2ct I-color VS2-SI1, a 1.9 D SI1 (for fun not for reals), a 2.25 K SI1, all which did not have similar grading comments. They all had the same clarity, contrast (with only a slight tint noted mostly in the K), brilliance, and scintillation to my eyes at 10x and 1x.

My thoughts with that regard are this: if the clouds not show affect the grading, they will use different language: "grading based on clouds not shown." To my eyes, this stone had no additional clouds affecting its clarity.

The jeweler, Dan Moran of Concierge Jewelers in the LADJ, was also quite happy with this stone. It was his second favorite, only after his own 1.9 D SI1.

Well that is excellent that you have seen multiple stones and have a jeweler you trust (and has unconditional return policy, I am hoping!). The numbers all look good, so I can see you did your homework!

You are correct that "grade based on clouds not shown" is a big red flag and your stone does not have that. The comment "additional clouds not shown" means there are more clouds than plotted on the clarity plot, so they are there, but if your jeweler thinks they don't cause an issue, that's great. It's not easy to find a 2+ ct SI2 that is both eyeclean and has no clarity issues hampering light return. But hopefully you have found one of the rare good ones!

One of the jewelers posted a stone the other day that showed a diamond that appeared clear to the eye and maybe a 10x loupe, but it had a lot of clarity issues that could not be seen until there was higher magnification. That is part of the reason I am being very cautious with you. If I can find it, I will give you the link so you understand where I am coming from!

Okay, this is funny but you posted several times in the thread I was speaking about! I had not followed it after the initial posts were made.

When I saw the 2.5KSI2 that I bought through JA, I was disappointed to see it was cloudy when compared to other stones.
I didn't have that experience with this one today at all. It was icy and bright. I really couldn't find anything negative about this stone.

Are the clouds and other inclusions on the GIA grading? yes.
Are they potentially affecting the stone? yes.
Are they affecting it enough to where I see them or find them to be disruptive? No.
Did the jeweler think there was transparency issues? No, probably not; especially because he had other diamonds in his own stock he could have been pushing on me, if that was his style.
Do I think I beat GIA or the system? Not a chance.

Am I finally happy with a stone? Yes. I'm doing it. this is my stone

It's a much safer color at J. You did all your homework on clarity. It's got great numbers. You've seen it in person.

I do highly recommend you get it set by Victor Canera, since you want pave and his is in So Cal.

I look forward to seeing this stone!
"So often in life, things that you regard as an impediment turn out to be great, good fortune." -- Ruth Bader Ginsberg

not a perfect photo, but here's the gist. 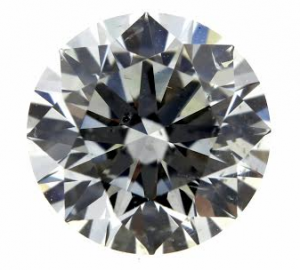 So glad you persevered until you found a good one! I concur with Gypsy on using Victor Canera for a pave setting especially if you are nearby!

Part of me thinks that you guys, at some point, give up and say "good job" even when you don't believe it.
...but, in this case, i don't care if that's the case

Anyway, i really liked it

two issues with victor canera: he's nearly 4 grand. he only works in platinum.
You must log in or register to reply here.
Be a part of the community Get 3 HCA Results
Jewelry Blog