Such a sad year with losing so many amazing artists.

The star, who launched his career with Wham! in the 1980s and later continued his success as a solo performer, is said to have "passed away peacefully at home".

Thames Valley Police said South Central Ambulance Service attended a property in Goring in Oxfordshire at 13:42 GMT.
Police say they were treating the death as unexplained but there were no suspicious circumstances.

In a statement, the star's publicist said: "It is with great sadness that we can confirm our beloved son, brother and friend George passed away peacefully at home over the Christmas period.

Duran Duran referred to the the so-called "curse of 2016" - following the deaths of David Bowie, Prince and Rick Parfitt - posting on their official Twitter account: "2016 - loss of another talented soul. All our love and sympathy to @GeorgeMichael's family."
The band included a picture of Michael with singer Simon Le Bon, Sting and Bob Geldof. 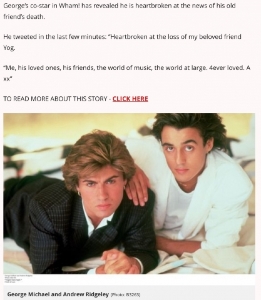 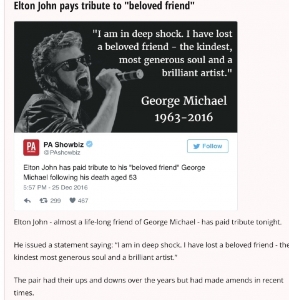 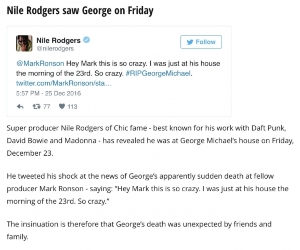 So sad.
I traveled across Europe when I was 19 and listened to George Michael (Wham!) on my tape deck throughout the trip. (Remember tape decks lol).

Rockinruby, you're right...we lost a number of talented artists in 2016.

RIP George Michael.
“Until one has loved an animal, a part of one's soul remains unawakened.”
― Anatole France

Rockinruby, you're right...we lost a number of talented artists in 2016.

I think that would be an excellent soundtrack to drive across Europe to. I had one of his solo albums that I wore out from listening to it so much. I saw him a couple of times in concert which was really great.

Careless Whisper is one of my favorite songs. He sang it with such emotion - beautiful. The first time I heard it I was awakened from a dead sleep in the middle of the night - I used to need noise to fall asleep. 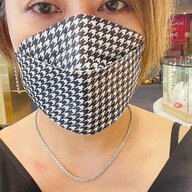 George Michael when he was half of Wham was one of the favourite groups of my older cousin and her friends and that was my introduction to Wham at 13. News of his passing brought back those memories vividly. My ex-husband used to play his CDs on our road trips to Malaysia...and that's another throwback that I had forgotten. Thank you for the music, George. RIP.
You must log in or register to reply here.
Share:
Facebook Twitter Reddit Pinterest Share Link
Be a part of the community It's free, join today!
JEWELRY BLOG