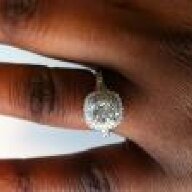 I ordered my setting from a company on eBay (I know)! When it came, it was horrible, misshapen, uneven, too thin, it didn't even look like it would be structurally sound. So back to the drawing board. I had called eternity before and they didn't have a showroom (I live in NYC) and they didn't have a replica that I could try to make sure it was the setting I wanted. I took the risk and ordered the setting. A few days later, I got a call from Yoni at Eternity saying that since my antique cushion from ERD was a little more rectangular (1.08 ratio) it wouldn't fit flush in the settings they had in stock. So I needed to have the setting custom made. Of course I was worried. This setting was almost twice the price of the other one and I hadn't seen it in person either. I asked Yoni a bunch of questions, making sure that it was similar to the Tiffany Soleste, which I loved but didn't like their center stones as much honestly. He said it was similar so I told him to go for it. He told me custom usually takes 3-4 weeks (keep in mind, we got engaged without the ring so the waiting has been difficult). So he said he could try to have it done in 2 weeks!

It was scheduled to be delivered yesterday and since I was at work, I saw that an exception was listed on the Fedex website. So I thought I'd have to go pick it up. Right when I got home though, the Fedex guy came back to deliver it! I was so grateful. I nervously opened the box and almost cried! It is absolutely what I wanted!!!! So overjoyed I emailed Yoni right away. I would definitely work with Eternity again and I may get my wedding band from there as well. 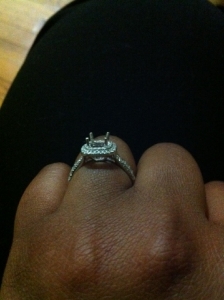 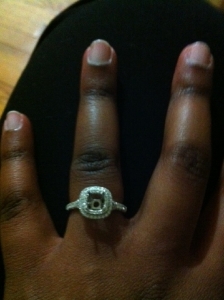 Life has taught us that love does not consist in gazing at each other but in looking outward together in the same direction.--Antoine De Saint-Exupery.

That's beautiful! So glad it worked out for you. I'm waiting patiently for my custom design from Eternity Diamonds right now. So nervous!

Don't be worried! I was nervous too especially since I didn't get to see a replica before hand but it was exactly what I wanted.
Life has taught us that love does not consist in gazing at each other but in looking outward together in the same direction.--Antoine De Saint-Exupery. 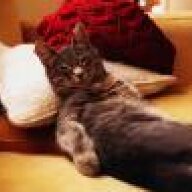 that looks gorgeous! I was almost going to go with that setting. I'm so wrapped to see that it worked out! Yoni is great isn't he? Cant wait to see the final pic - what size stone are you putting in there?

Hi MelbourneGirl! Yes Yoni is great! We set a 1.01 carat antique cushion from ERD in it! I love it. Will post pics of finished product tonight.
Life has taught us that love does not consist in gazing at each other but in looking outward together in the same direction.--Antoine De Saint-Exupery. 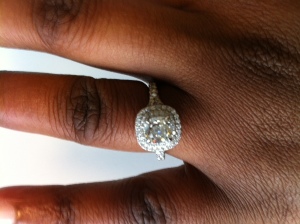 Life has taught us that love does not consist in gazing at each other but in looking outward together in the same direction.--Antoine De Saint-Exupery.

oh it looks so fab! Can i ask more details about your stone? what are the dimensions and L/W ratio? It looks fab! It really does look very similar to the Soleste. How do you feel about it? Do you think it looks the same or can you see diferrences? I loved the soleste instore at tiffany. I always thought a double halo was too much, but it seemed so delicate on the hand. How does this one compare?
Congrats again - just gorgeous x
Need many more photos! Pretty please
A

That's gorgeous! And I know size doesn't matter, but your setting makes your 1.01 carat look HUGE! The proportions on your setting really balances well with your centerstone. It's absolutely amazing.

Hi again MelbourneGirl! The dimensions are 6.12x5.67x3.87mm. 1.08 ratio. It's a little more rectangular. I think Chris said he like to stick to 1:1-1.08 so it's at the limit but I loved the stone once I saw it and the GIA cert was on my birthday so I took that as a sign. I think it looks just like the soleste but I'm mainly going by memory and the pics posted by frosted. The last time I tried on the soleste was in July.Hope I answered all your questions. Will try to take proper pics soon. These were from my iPhone.


AtomicLush: thanks so much! It really does make it look so much bigger. I love the finger coverage that the double halo gives and the fact that it's still delicate without seeming flimsy.
Life has taught us that love does not consist in gazing at each other but in looking outward together in the same direction.--Antoine De Saint-Exupery.