When a couple of the regulars here first said how much they liked Elizabeth Warren, I really didn't know much about her. Since she has been targeted by Donald Trump and called "Goofy" and "Pocahontas" One cannot miss her anymore. I have to say that I am, now, a huge fan. I love what she said about his "money grubbing". She certainly shoots from the hip!

AGBF
Against logic there is no armor like ignorance-Laurence J. Peter

I'm pleased to be able to say that she was one of my FIL's students very early in his highschool teaching career. He said she very obviously had "it" even in highschool - she was going somewhere.

As far as I'm concerned, she's the only good thing to come out of Oklahoma in a very long time.

Oh, and for those wondering why Trump is calling her Pocahantas, he's slagging her for supposed lies about the Native American connection.

If you're not from around here, you can't truly appreciate just how many families have as part of their family lore, that they've got some Native American blood in there. It often is a matter of oral tradition rather than being settled fact or because they are on the rolls of a particular tribe. Which is my way of saying, she probably got caught in that rather than anything deliberate, ala the following...

In April 2012, the Boston Herald sparked a campaign controversy when it reported that from 1986 to 1995 Warren had listed herself as a minority in the Association of American Law Schools (AALS) directories.[67] Harvard Law School had publicized her minority status in response to criticisms about a lack of faculty diversity, but Warren said that she was unaware of this until she read about it in a newspaper during the 2012 election.[67][68][69] Scott Brown, her Republican opponent in the Senate race, speculated that she had fabricated Native American heritage to gain advantage in hiring.[70][71][72] Former colleagues and supervisors at universities she had worked at stated that Warren's ancestry played no role in her hiring.[68][69][72][73] Warren responded to the allegations saying that she had self-identified as a minority in the directories in order to meet others with similar tribal roots.[74] Her brothers defended her, stating that they "grew up listening to our mother and grandmother and other relatives talk about our family's Cherokee and Delaware heritage".[75] In her 2014 autobiography, Warren described the allegations as untrue and hurtful.[76] The New England Historic Genealogical Society found a family newsletter that alluded to a marriage license application that listed Elizabeth Warren’s great-great-great grandmother as a Cherokee, but could not find the primary document and found no proof of her descent.[72][77][78] The Oklahoma Historical Society said that finding a definitive answer about Native American heritage can be difficult because of intermarriage and deliberate avoidance of registration.[79]"
When asked how to practice Zen, a master said, “Stop cherishing opinions”. He did not say have no opinions. Cherish means to hold dear, to identify with, this is “my”, “mine”. When you identify with an opinion, your sense of self is invested in it. That’s the delusion. So stop cherishing opinions.

I happen to have been friendly with someone (back then she was a teenage girl, although now she would be a woman of my age) who was from Oklahoma and who had a Native American heritage, just as you described. So I am aware that many people in Oklahoma (this girl was fair skinned with blonde hair and blue eyes) do have a Native American heritage. In my friend's case, however, I believe that her mother was totally Native American. Her mother was LaDonna Harris and her father was, when I knew her, the Senator from Oklahoma, Fred Harris. It may have been before you were born!

While I was looking around, I found this. It seemed to be very timely, and then I realized why it was. It was current. It was written by Fred Harris today...http://newmexicomercury.com/blog/comments/greatest_us_challenge_income_inequality

The photos below are from his unsuccessful presidential campaign. 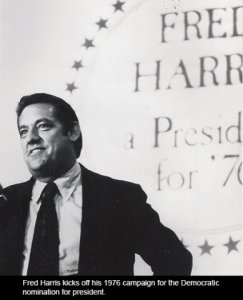 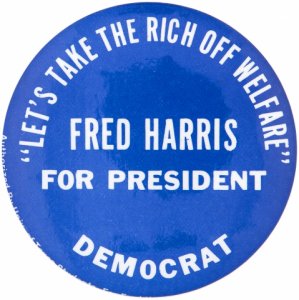 I love her bunches. She is going to be huge going forward. And constantly hammering on Trump by pointing out what a personally cruel bastard he really is, is a great approach.

https://www.washingtonpost.com/politics/clinton-and-allies-open-new-front-against-trump-his-profits-from-the-housing-crash/2016/05/24/16399474-21f3-11e6-8690-f14ca9de2972_story.html
When asked how to practice Zen, a master said, “Stop cherishing opinions”. He did not say have no opinions. Cherish means to hold dear, to identify with, this is “my”, “mine”. When you identify with an opinion, your sense of self is invested in it. That’s the delusion. So stop cherishing opinions.

I've always liked her. I first encountered her in her sensible financial advice, and also her standing up for various issues I agreed with. I think she would be great in politics such as a cabinet position. She has more common sense in her pinky than Trump has in his entire body.

I want to clone her.
"So often in life, things that you regard as an impediment turn out to be great, good fortune." -- Ruth Bader Ginsberg

ksinger|1464197912|4036194 said:
I love her bunches. She is going to be huge going forward. And constantly hammering on Trump by pointing out what a personally cruel bastard he really is, is a great approach.
Click to expand...

+1 to this! I adore her as well, and love when she decimates Trump, particularly on Twitter (and does so knowing he will spew hate at her rather than using facts or defending his position). Here are some recent gems from her account:

Elizabeth Warren ‏@elizabethforma May 11
@realDonaldTrump: Your policies are dangerous. Your words are reckless. Your record is embarrassing. And your free ride is over.

Elizabeth Warren ‏@elizabethforma May 11
We get it, @realDonaldTrump: When a woman stands up to you, you’re going to call her a basket case. Hormonal. Ugly
Click to expand...

it is harder to find a "MIND CLEAN" stone than a eye clean stone !!
A

I was disappointed she didn't run this cycle. I have so much respect for her.
You must log in or register to reply here.
Be a part of the community Get 3 HCA Results
Jewelry Blog