Well, I did bite the bullet and get that cushion for my mom. If you are interested in the stats, it is the second of the two diamond specs posted here.

I posted a full review of my first diamond experience a while back, and I really appreciated how Mark went the extra mile for me, even though I did not buy the diamond from him. I was going to buy my mother a round and present it on the eve of my wedding, but after she saw WF pics of my cushion, she told me how much she loved square diamonds. I showed her pics of radiants and princesses, but she liked the cushion. Now, my mother is the type of woman who is VERY supportive of her daughter – if I wanted to be an axe murder, she’d express disappointment but tell me she’d bring me treats in prison – so I don’t know for sure if she DOES love the cushion or she’s trying to make me feel great. So tough nuggies to her if she doesn’t….she’s gettin’ one!

I decided to spread the wealth and give Mark a try (and also because I didn’t want to subject WF to any more of me without a break!

). I told him I was in no rush and what I was looking for. Mark found a diamond very fast, and coincidently it WAS the initial diamond I was looking at with him.

- With Whiteflash, they have lots of tools and reports to give you for you to make decision. Sarin, idealscope, 40x photo, hand models, toe models, pie models, etc etc etc. For example, here is photo of my cushion that I received from them: 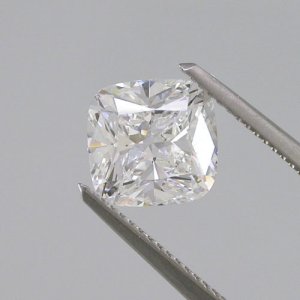 I love cushions so it''s no surprise I''m drooling over here.

- Mark on the other hand is well known around for knowing a thing or two about cushions, as evidenced from his recent video interview with Leonid. I get the feeling that Mark things all the reports are just fine and dandy, but he’d like you to trust his very trained eye. When I asked him for a photo, this is what I received.

Now, I’ll admit, I could tell better what the facets were like from the WF pic of the first diamond. I’ll also admit that I was probably more particular BECAUSE I went with WF first and got used to the info they were sending me.

Another difference was trying to understand the personality of the diamond. I asked WF about the inclusions, as I didn’t get any info at first besides the sarin, idealscope, etc. Bob was great and responsive and told me the inclusion I thought I saw in the pic was the inclusion, and he promised it was eye clean. When Mark called me about diamond number #2, he said,

“It’s a beautiful stone. The inclusions are in X area of the diamond, and there are also some inclusions that make it look peppery. It is eyeclean, but if you turn the diamond over, or look at it from the side, you may be able to see them because cushions tend to be glassy underneath.”

He went on to the point that I kind of got nervous! I had to ask again, “but it’s nice?” And he exclaimed, “Oh no, it’s a beautiful stone, but I want you to know what you are getting.”

My point being that if you do work with Mark T, don’t be discouraged if you don’t get some of the photos and images you see here on PS…Mark will absolutely do his best to educate you about the stone.
One last point - WF does seem to be about structure – they send you a VERY detailed return policy. When I asked about Mark’s 14 day return policy and exactly what that meant “Yes, it’s 14 days, but I am not going to make your life difficult, don’t worry.” And I believe him.

Well I got the ring yesterday at the appraisers. Jennifer Thornton Davis here in L.A. always has the customer open the package because she feels the customer’s first impression is an important factor. When I opened it, I exclaimed, “Oh my god! I didn’t expect this!”

Absolutely gorgeous!!! But the part that totally surprised me was the setting. In the spirit of “putting my faith in Mark”, I simply asked him to give me a white gold setting with 4 prongs, figuring my mom would pick her setting later. Mark said it would be something like #2376 on his site, which is very basic. I was fine with that, even though I love it because I asked him to give me his cheapest setting (and he quoted me cheaper than what is on the site, but I won’t say how much!) Honestly, I expected cheap and nasty. He had called right when he shipped it out to tell me that he had put it in a different setting than originally planned because he felt it looked the best.

I LOVE the setting he chose, and wonder if we’ll even need to get another setting. Coincidently, it has very similar elements to the setting I chose for my e-ring (prong style, basket, etc). I tapers to the diamond and it’s lovely. I told Jennifer how much I paid, and she kept saying “No way. I’m telling you right now he did not make any money on it. You can’t walk into a store and get that setting for that price. No no no.” She said it was a great setting, and since I got such a great price on the diamond, Mark must have comped me the setting. I don’t know if he did or didn’t, but I love it.

BTW, both stones are gorgeous…they are twins of each other, with my mother’s ring being slightly smaller. I actually moved them at the same angle at the same time, and saw the facets flash uniformly on both diamonds…a synchronized dance!

The bottom line – although Mark, like all vendors, would like to make the sale, I truly and honestly believe that he has his customer’s best interests at heart and will go OUT OF HIS WAY to delight them. I can’t express how much I have enjoyed working with him. Also I want to reiterate again how much I also appreciated Whiteflash. ERD got the better end of the deal as far as the more “relaxed” traveling gal. Whiteflash had to work a bit harder for their money, but deserved every penny. If you are comfortable and willing to trust Mark's eyes, I can confidently can recommend Engagement Rings Direct.

Pics to come shortly on SMTR of both diamonds!

ETA: Sorry, I guess I couldn't add the photo in the body, so the ERD photo is at the end! 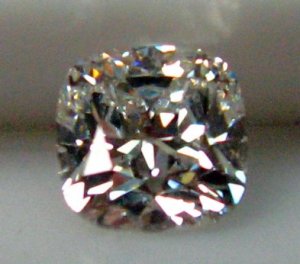 Thank you SO much for that thorough comparison and review, including pictures and examples!!!! Both rings are stunning, btw.

Date: 5/12/2006 2:50:29 PM
Author: FireGoddess
Thank you SO much for that thorough comparison and review, including pictures and examples!!!! Both rings are stunning, btw.

ditto...dang I WANT a cushion