I am super new here in fact it took me about a day to figure out how to post but some bees from weddingbee told me you ladies are experts on CAD help and I'm in some serious need. We just got back the 1st CAD and I'm trying to figure out whether the amount of filing down that would have to be done is practical to make it look like the model ring or whether that is even what would be done. I was warned about the bulkiness but i feel like this is over the top. The idea is a 6 prong tulip basket for an oval with claw prongs...Please let me know what you ladies think! 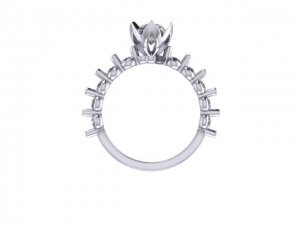 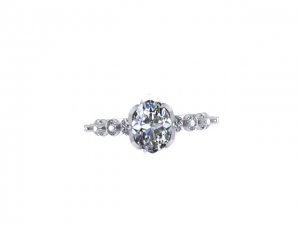 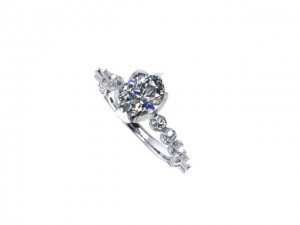 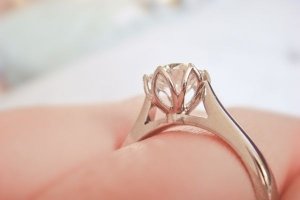 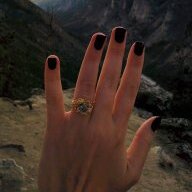 Welcome to the ladies in waiting board!! Have you tried posting your CAD images and questions in the Jewelry or Rocky Talky forum? You might find better guidance there since there are many more trade professionals that frequent those boards Your ring is going to be SO pretty! Have you chosen your diamond?
B

Hi imCriss, thanks for the help, I was thinking afterwards tgat I might have done it wrong . But thank you and yes it is a 1.21 oval cut F color SI1 double xx. Not sure of the ratio as I didn't take a picture as I was too excited

Thanks again for the advice, I'll do that now!

Hi Bean I wouldn't worry about removing your post! You never know what advice you're going to get, and It's nice to see some new activity on here! Your diamond sounds gorgeous! Did you get to pick it out, or did your SO surprise you with it? How much say do you get in your finished ring? What's your story? who did the CAD pics for you? Glad to see another Bee as well. I found PS first since I'm kind of a jewelry buff, but I've been hanging around the "waiting" forum on weddingbees for a few weeks
B

Thanks for the advice imcriss! My SO and I met back during our freshman year at college and have been together for 6 1/2 years. This past year we have been looking at rocks and rings and he pretty much put it all in my hands as to shape and design. We picked out the stone together last month and decided to do a custom job for the setting to pull together two separate rings into one. I told him after the CAD approval process I dont want to be invollved (which he seemed a little nervous about) to allow for the rest of it to be a surprise. I am super grateful he has brought me into the ring process since it's so darn fun but sometimes I wonder if I am taking away from the overall surprise. I must say the hardest part is keeping the whole thing a secret from friends and family!

What is your story @imcriss?

It looks like you got some decent advice on your other post Does that make you feel better or are you still worried that the petals are too thick? I wish I could have been more help, but my jewelry store doesn't do CAD images and I have absolutely no experience with them. Have you talked to the jeweler about your concerns yet? I'm sure that they must have some kind of policy that if you don't like it they'll remake it until you do, right?

I know what you mean about being worried that seeing too much of the ring will ruin the surprise, or make it not as special. My BF originally wanted the entire thing to be a huge surprise until he realized that I'm impossible to buy jewelry for, and he didn't know what he was doing. Pretty much the second he asked my opinion about the stone, I sort of overhauled the whole thing. He tried to be sneaky, but I think he's given up since my boss actually has given me the unique opportunity to build my ring start to finish with her guidance. I'm only in the early stages of manipulating the jewelers wax, but it's a pretty awesome experience already. I do worry that since I'm going to see it finished before BF presents it to me that it'll take away from the surprise factor of his proposal, but who cares as long as I get to spend my life with him, and I think actually creating the ring myself makes for a better story for us

Your "how we met" story is so cute! I love those stories and serious props to both of you for weathering college together Our story isn't as glamorous, we met online about two and a half years ago, fell in love after our second date and we've been together ever since. Do your friends and family know that he's planning a proposal eventually? I have no idea how you're keeping it a secret!! I've been so bad at not telling EVERYONE every single detail!
B

That's awesome that you are literally designing the while thing! And everyones story is so special, you both knew already after the second date?! That's incredible!

And yes, I feel much better now ftom all the help on the other post and after talking to the jewler. This is now time to take the back seat and let everything happen as it will. And no, Noone knows any thing yet from either of us so it will be a complete surprise which will be fun although I know he does plan on taking my parents out to dinner to ask but still it's all so secretive irs nearly impossible to contain it all! 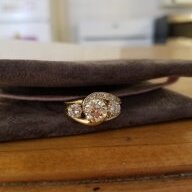 I know very little about CADS or anything but I love that inspiration basket! It's going to be gorgeous.

And welcome to the LDW board, bean. I hope you stick around so we can see that ring when it's finished. Also, we can be a great place to vent when exasperated or gush when excited since we are all in similar boats here.

Bean11|1468764424|4056323 said:
That's awesome that you are literally designing the while thing! And everyones story is so special, you both knew already after the second date?! That's incredible!

And yes, I feel much better now ftom all the help on the other post and after talking to the jewler. This is now time to take the back seat and let everything happen as it will. And no, Noone knows any thing yet from either of us so it will be a complete surprise which will be fun although I know he does plan on taking my parents out to dinner to ask but still it's all so secretive irs nearly impossible to contain it all!
Click to expand...

So glad you're feeling better about your CADS! Do you have any kind of timeline when it might be finished or any inkling when he might propose? That's super cute that he's taking your parents out to ask. We live across the country from my family so my mom has only met my BF twice and my dad doesn't get to meet him until this fall. I have to admit, I've always kind of hoped that he would ask for me too. Also, like Ariadne said, stick around the boards! If no one on your end knows that you're waiting for a proposal, it's nice to have an outlet!
You must log in or register to reply here.
Be a part of the community Get 3 HCA Results
Jewelry Blog