I have to write this post with a heavy heart mainly for the kind of experience I have had with a jeweller and secondly how this whole dilemma has been an example of my inexperience and lack of backbone.

My store is similar to Diamondhoarder's thread but I may still have a way out.

In short, darling fiance bought me a beautiful diamond previously mentioned. The setting I liked was this one: https://drive.google.com/file/d/0B3LNAImsxtoRenFucGRJTHc3R0k/view?usp=sharing

This setting is $1146 CDN eventhough it's a simple solitaire band. The cost is high because the basket which holds the diamond is made of platinum amongst other reasons such as workmanship etc.

We thought we would just get the band replicated in 14kt white gold. Most jewellers quoted us $300 for this setting. I went ahead with one and made the mistake of paying him full upfront eventhough I read his store has a no refund policy, exchange only. He even asked if I would pay a $100 now and the rest later. I dont know why I was dumb enough to say sure I will pay in full eventhough my gut said, just pay the $100 and let him finish the job. My dad has only told me this all my life!! Anyways, Went to pick up the ring and it looks like this:

As you can see, this ring does not have that tapering\bowlike look that I wanted. This jeweler refused to acknowledge that I showed him a picture of what I wanted (?!), asked another to confirm that it was infact tapered and not straight as it looks on my finger and told me I was being too picky. I was stunned. I walked out of there without saying anything to him because I just wanted him to fix it which he says he will try.

I am now concerned:
1) let's say we accept what he makes, he is NOT the setter, what if the setter has an issue with this setting?
2) I really dont like the ring or this guy, I don't want to have to look at my wedding ring and be reminded of this awful story each time
3) Fiance says we should just buy the original ring because he's had enough and he's on a timeline. The ring has to fly with him within 3 weeks so we are short on time.
4) If I dont like the ring, what else would I exchange it for at this shoddy shop .. ugh.
5) Over $1k worth it for that setting?

Please give me your thoughts guys. I have to go see the ring on Wednesday and I don't trust this guy one bit but I dont want my fiance to be out of pocket for something that I probably could have gotten done for cheaper if I went to a better jeweller ..

Is your diamond just sitting in the setting? It doesn't look like the diamond is set. It sounds like it doesn't taper as much as you wanted, but it looks fine to me other than that. $300 is a very low price, too. I would only pay $1000 for a simple solitaire setting if it is all platinum.
A

HI DS, the diamond has not been set yet. I rested it in there to see what the whole package looks like. I am taking it to the Jeweller whom I bought the diamond from to do the setting.

The original ring is not all platinum, that's the conundrum. It's 14 kt wg with a platinum head\basket which the diamond rests in. If it was all platinum I would have definitely not thought twice about it either.

This Jeweller tried to tell me that I should get my Setter to file the shanks to make them look more tapered which further threw me off guard because it needs more gold\material for him to be able to give that bow-y effect. Right now the shanks are too thin. What will he file?

If I buy the original from the Jeweller, albeit its $700+ more expensive but there will be some peace of mind about workmanship especially for something you will wear all your life. 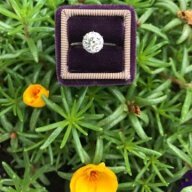 I would cut my losses at $300 and go back and get the pricier setting. You know you will love it and you plan to keep it a long time, right?

Could you maybe sell the $300 setting and recoup some of the cash?

Is Whiteflash or similar a cheaper option?

This looks pretty similar: http://www.whiteflash.com/engagement-rings/solitaire/ritani-1rz7241-solitaire-engagement-ring-3991.htm
(I don't know the exchange rate, sorry if this is a dumb suggestion!)
M

I'm kinda confused. Although you live in Canada, since NYC is the location seen on the interior of the ring box shown in your "aerial" photo, I'm wondering if you ordered the mounting from a vendor in NYC (if in NYC, that may have a bearing on the return-refund possibilities). Also, how is the mounting described on your order-receipt for payment -- and what does the receipt say about returns-refunds-exchanges; can you post a scan/pic of the order-receipt?
C

No, you are not being too picky. I would say that it's worth the extra money for something that you will wear every day (hopefully) for years to come. I'd buy the original platinum setting and see if you can use the $300 towards a simple pre-made platinum wedding band (so you can see what it looks like first), or alternatively, some other piece of jewelry that you will wear if the vendor refuses to refund (maybe you need a new gold chain for a pendant you already own? Those run around $300 CAD). At the end of the day, $300 sucks to lose, but it's not so much to justify wearing something that will taint your feelings towards your engagement. And then never buy from that jeweler again.
You must log in or register to reply here.
Share:
Facebook Twitter Reddit Pinterest Share Link
Be a part of the community It's free, join today!
JEWELRY BLOG