At a loss for a Christmas present

My son is 2 1/2 and I can't for the life of me come out with a main gift for Christmas. Ideally I'm looking for some sort of musical interactive toy because he loves music so much. He already has an activity table that plays music and sings songs etc. I was looking at this:

I know some of you have kids so if you have any suggestions let me know. TIA!
They’re real and they’re spectacular!

are you open to apps for a tablet? I remember my friend seemed to download apps for every new thing her son was learning at daycare.

Man, I remember Christmas as a kid consisted of a Christmas sweater, and a hat, gloves, and new coat (if i grew out of my current coat). No fun stuff. Kids have it so good nowadays. #borndecadestooearly
(I am a farting enigma. Don't eat me or else I will blast my way out of your guts!)

Momhappy, thanks for that suggestion. It looks like something he would enjoy and I know we have coupons at TRU so this is a good possibility.

Pinto, you are too funny! I was spoiled rotten so I got A LOT at Christmas and this was the early 80's when there were so many good toys! He has snuck onto the IPad a few times but I'm not really into him letting him play with an IPad at this age. I just started letting him watch Sesame Street on PBS so I'm kind of conservative in the media department. My friends all refer to me as Amish mom. Lol!
They’re real and they’re spectacular!

My almost 4 year old loves music. My mom got him one of those little kid karaoke machines last Christmas - basically a CD player/or mp3 player with a mic - and he loved it. I hated it but he loved it.

We also have one of those piano mats. Both my kids (6 and almost 4) have been enjoying that for a few years. They put on shows for us.

My kids are tough to buy for - they basically like junk. Last year my sister got my younger one a bag of gumball machine toys and he was in heaven! He opened and closed those stupid bubbles and made us guess what was inside a buzzillion times.

When our oldest was 2.5 years, we got her a vintage Fisher Price record player for Christmas. One like this:

They do make new ones, but they are digital and don't have the same sound. Plus I don't think the record spins like the old one. Both of our girls still love playing with that record player.

Also, I recommend a toddler-friendly music class if there is one close by. We did a weekly class with both of our girls at our local conservatory when they were infants. They continued that class until they were 3 and ready to pick up an instrument. Having the musical background has really helped them understand beats, melodies, rounds, etc. Obviously that's not the kind of gift you can wrap up, but would still be a great idea as something "extra".

Our girls also LOVE music boxes. The small kind you turn the knob to play. Every time we go to the symphony, we pick up a new one for them, so they have a collection of 20 or more at this point. Every night before bed, they each choose one to play when we tuck them in. They've become really sentimental to us and it helps the girls to recognize pieces and composers.

I bought this as a Christmas present for my kids this year--not sure if they'll like it at all, but I'm the only person in our house who plays a wind instrument, so I felt I needed to represent!
https://www.amazon.com/gp/product/B01AY6XDSU/ref=oh_aui_detailpage_o01_s00?ie=UTF8&psc=1

ETA: you could even buy an electric keyboard if you think she might be interested. We have a piano at home because my husband is an avid player and our 4.5-year-old also plays. Our 2.5-year-old doesn't take formal piano lessons, but our 4.5-year-old likes to play "piano teacher" and has taught her really simple tunes like Twinkle Twinkle Little Star.

I have the fisher price stand up toy and was just about to give it away as my son (now 18 months) never took to it, even though he too loves music.

How about this: https://www.amazon.com/Melissa-Doug...music+toy&refinements=p_n_age_range:165890011 Or something similar, a variety of instruments that you can keep in a basket and pull out with him every day, play music (maybe get him some kid music cds too) and turn it into a mommy and me time.

I've also done a series of early music classes. Check for Music Together, you may have one near you?

ETA: Without a doubt, both of my kids would love that Fisher Price Record Player! Thanks for the idea, NEL!!

NEL, I can't help but get a laugh out of how sophisticated your children seem compared to my junk loving kids!

Please tell me they pick their noses or think bodily functions are the most hilarious thing ever. My DH is a musician and would be so thrilled if my kids showed any interest in actually playing as opposed to just listening to music.

ETA - I hope the above doesn't come off as rude! Just the juxtaposition of my kids liking gumball machine toys and yours showing interest in the symphony really struck me as funny for a moment. And I needed a good laugh today!
M

Stephanie, do you sew? You don't have to be great at it to make things like this. I made the garden when my daughter was 2. She loved it. She's 4.5 now and still plays with it from time to time. I think the little campfire/marshmallows are adorable too. You can find the tutorial for the garden at abeautifulmess.com and can probably find the campfire one or similar on Pinterest. Just a thought for something different.

As far as musical toys; she has a kid's size guitar, and an electronic violin that "plays" itself, and a set of Melissa and Doug instruments. The latter has been invaluable--that brand is durable and always has really cute stuff. 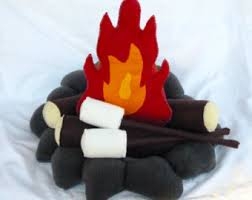 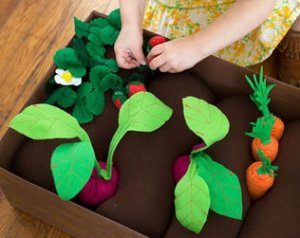 Arcadian, our nine year old got a kids drum set from my MIL when he was younger, it went in the attic never to be seen again!

Puppmom, piano mat...there is something I didn't think of. Karaoke machine maybe when he is older and I am a little harder of hearing

NewEnglandLady, I had forgotten all about those record players, I had one and loved it. Also music classes aren't something I would think of but a great idea. My nine year old has a keyboard but the little guy would probably destroy it, he is ROUGH!

Loves_Vintage, after looking at some of the reviews on the Fisher Price toy, I'm thinking he may be a bit old for it. He does not have any instruments though and the music classes, we do have some near us so that is a great idea.

Monarch, I have zero ability to sew maybe I could get a button on a shirt in an emergency but that's about it. Those projects are cute though, I might have a friend that could make them. The vegetable garden is super cute. I'm thinking those musical instruments would be good plus they don't require batteries! Extra bonus, I could find them at our local toy shop and patronize a small business. Win win.
They’re real and they’re spectacular!

Please tell me they pick their noses or think bodily functions are the most hilarious thing ever. My DH is a musician and would be so thrilled if my kids showed any interest in actually playing as opposed to just listening to music.

ETA - I hope the above doesn't come off as rude! Just the juxtaposition of my kids liking gumball machine toys and yours showing interest in the symphony really struck me as funny for a moment. And I needed a good laugh today!
Click to expand...

Not rude at all--in fact, I probably sound like an uptight tiger mom when I post stuff like this, but I swear our older daughter just naturally loves classical music. But both kids are typical in other regards. For instance, last night while we were finishing our meal in a restaurant, they were getting tired. They kept replacing lyrics to songs with the word "poop" and then laughing SO LOUDLY.
You must log in or register to reply here.
Share:
Facebook Twitter Reddit Pinterest Share Link
Be a part of the community It's free, join today!
JEWELRY BLOG