and the designer I chose for my settings is....drum roll... 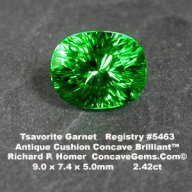 Some of you may be aware that my wife and sister are both building rings. My wifes a tsavorite, and a spessartite for my sister...both by Richard Homer.

Both want distinctly different designs, one modern, and one with micropave/melee.

We originally decided to go with Leon Mege, as his work looks spectacular, but after many missed connections, non-replied emails, and overall uncaring for the work I wanted to pay him for he lost out.

So far Maytal has been fantastically attentive and concerned about our project. Which is fantastic.

Just wanted to give a heads up, and wish me luck.

Wow, this is going to be quite the project!! I can''t wait to see what she does with your beautiful stones, what a guy you are! Please keep us posted.

After hearing so many great things about her work, I can''t wait to see these rings!!!

omg LOL I just had a reaction to reading this LOL!! Jealousy!!! hahaha When I read the name my head said NO, THAT''S MINE!! but in reality I''m still firmly on the fence with a stick up my butt juggling at least 5 names LOL.

Can you tell me more about why you chose her?
Sara

It will be interesting to see what comes of it. My wifes design is a bit fancier, but she knows exactly what she wants. My sisters is a little more up in the air.