Well it was one year officially from the first time we went ring shopping and my birthday. It was miserable all day, were having a typhoon in NJ, still! I was kinda down in the dumps that we couldn¡¦t do anything for my b-day, we were supposed to have a picnic!! ƒ¼ I found a salt water, gigantic 75 gallon tank on craigs list for $250 a steal, so we went to the other side of the state to get that, it was my birthday present for my b/f. We were on our way back from picking up the fish tank and b/f started talking about last year.. Yeah I really screwed up last year. I thought he would have planned something and he got hotdogs at the windmill and I started balling my eyes out that I was disappointed and didn¡¦t want to hurt his feelings (last year) He said, yeah, then I took you ring shopping to smooth things over¡K I said yeah, to shut me up and look at shiny things at Zale (Yeah I know bad, but it was just to get an idea¡K and the only place open at night! Lol
So, he mentioned I hope this year has been better, I said yeah I love the fish tank..


Anyway, we were in a rush as usual, late to go out to dinner with my parents. And he said I got you a little something, sigh I guess I just have to give it to you later.. We got to Spano¡¦s, oddly enough a couple businesses down from where we first met and we sat down at a booth and toasted with wine to my 24th birthday. Then b/f turned really quickly toward me and says nonchalantly, Hey, what would you say if I asked you to spend the rest of my life with you? I looked around awkwardly and said well I would say yes¡K.. (Fully knowing where this was going.) He said well then will you marry me? (I can¡¦t even remember is such a blur) I said what?!! I thought it wasn¡¦t ready? Oh my god, I can¡¦t believe it, holding my mouth in shock. At this point my mother is like what did he say?!! What did he say?!! And he opened the box and then she was like OHH!! Lol I was crying and my parents got all teary eyed. Even my father who is a big strong German man and he never crys! My mom was blown away by the ring and never thought she¡¦s be apart of the proposal! I still can¡¦t believe it!!!

It was public, yet private!! The best of both worlds!! I was about 8PM and only one other party at the restaurant. My FI asked for my father¡¦s permission upstairs before we went to dinner, when they went to look at the menu online. I had no idea, it completely caught me by surprise!! I was shocked and my mother said and here is a girl that always says you can never surprise me! I said I know he did it so well. Then he went into the yeah, the casting delay was a bs story.. I said I can¡¦t believe it, you a$$hole!! Laughing so hard! And he said I even had it for over a month!!! He got it on March 10th my Mom¡¦s b-day and he was going to do it that night at dinner, but it didn¡¦t feel right. He was teasing me that it was always right next to me where ever we went!! I was in the console on his truck and even in his tool box at one point. Just where I thought he¡¦d hide it!!!

He was so paranoid for the long month, he thought it was going to get out. He showed practically everyone the ring. He said didn¡¦t you find it suspicious that I have been locking my truck everywhere??.. I said no!

It gets stranger!!! We called his mom and she gasped, in disbelief, that¡¦s that same exact way his father proposed to me, on my 21st birthday with the same exact words!!!! It was weird being FI never talked to his parents about that stuff. I guess it¡¦s just like the old saying goes the apple doesn¡¦t fall far from the tree!!!

Sorry TYPHOON IN NJ today and yesterday!!
No sunny skys for nice pictures, but the fish tank certainly gives it a glow!!!

Also the man that carries a camera like a purse, didn''t bring it to the restaurant!!! (my dad) 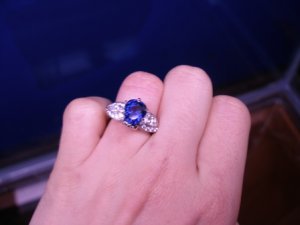 The scroll reminds me of two swans forming a heart shape

ties in nicely with the heart on the head and the surprise sapphires!!! 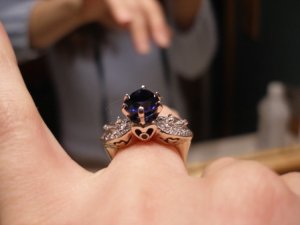 Aw, what a lovely proposal story!!! Congratulations!!! I really love your ring. The depth of color in your stone is just breathtaking, I hope you get some more pics of it. 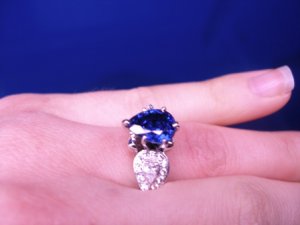 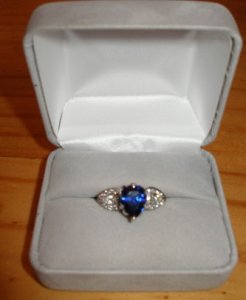 The flower shot, cheesy fake one, but still beautiful! 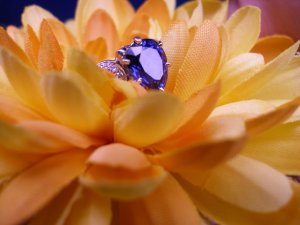 Who ever said there''s no such thing as blue elephants!!! 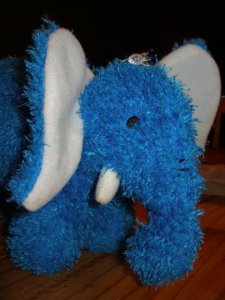 It was made to perfectly fit my finger, and it works!!! Doesn't spin at all, I know it's not a conventional ring look, but you never see it anyway
It really works!! 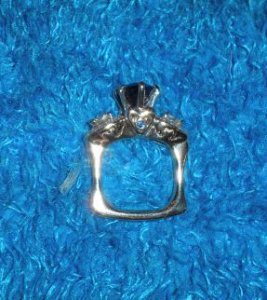 My fluff ball, not a mink!! my dog Boomer (Northern Breeds have so much fur) 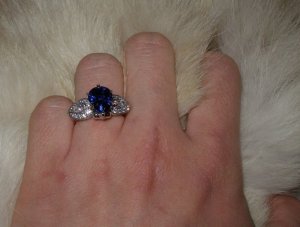 My hands are disgusting, one smashed finger, hopefully will soon heal.

What kind of wedding ring guys?!!!! 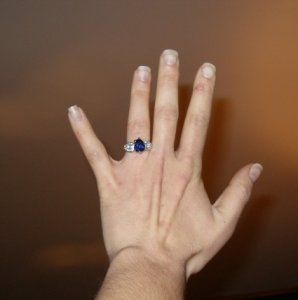 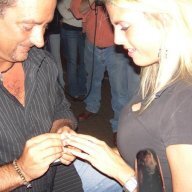 OMG girl that is one BEAUTIFUL ring!!!!

And for a wedding ring, I say one with matching stones... and that is TOO COOL how that ring fits your finger perfectly, what a unique band!!!

Congratulations on your engagement; your ring is beautiful! How do the round sapphires match up to it?

What a great story!!! Congrats!

Congratulations Mustangfan! What a sweet proposal and that sapphire is such a wonderful color!
The first fondle is free. (Posted just for you Monnie!)

Congratulations! What a sweet proposal story. And it''s wonderful that your parents were there too, to share the moment.

I haven''t even had time to look kismet!!

I didn''t forget though!!

I think you''ll be pleasantly surprised that they are almost a perfect match. I can''t believe it!!!
Looks like they were all from the same stone!!!!!!!!!! 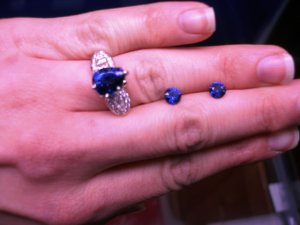 I have had my eye on this one.. or going in the other direction just plain

I hope Irina is around with her magical skills 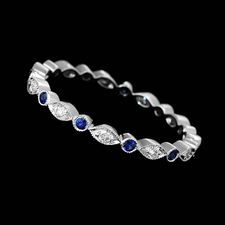 Mustang OMG!!!! I''m so happy for you congratulations. That ring is gorgeous and your proposal sounds so great. YAY!!!!

CONGRATULATIONS!!!!!!!!!!!!! Mustang, you have been waiting SO patiently. I''m so glad it happened for you this weekend!!!

I''m so happy for you! Your ring is gorgeous and all that waiting finally paid off! Congrats!

Congrats! I really like the color of the sapphire, it''s so pretty

Ooh, they do look great together!

It is lovely, congrats on your engagement!

I completely missed this thread, and was reading another one, and it said you were engaged, I IMMEDIATELY teared up for you!! That SNEAK!!!!! I can''t believe these guys! They sure can fool us!! Just when we think they aren''t think of us at all, the completely suprise us

CONGRATS!!! Your ring is stunning!

It''s amazing!! Congratulations! I''m so excited for you... I guess we were all fooled!

As for the wedding band, your ring is so beautiful on it''s own, I would wear them on separate hands. I love the one you posted with the sapphires and diamonds.